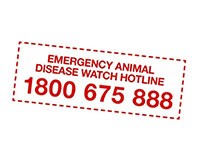 Early intervention is vital in an EAD outbreak! If you suspect a pest or disease outbreak or have seen something unusual and you’re not sure whether it’s an exotic pest or disease, report it! Don’t worry how insignificant it may be. Small signs may be an early indication that something’s wrong.

You certainly won’t be penalised for calling the EAD watch hotline for disease that turns out not to be an emergency. In fact, quite to the contrary, you should be applauded for making the call.

The EAD watch hotline is a 24-hour-a-day, seven-days-week service that can be called from anywhere in Australia, as long as you have phone service

Calling the EAD watch hotline shouldn’t be considered as a last resort, or an imposition on someone, or a number to be called only when there is already an outbreak somewhere else. The EAD watch hotline is there so that in the unlikely event there is an EAD outbreak, immediate action can be taken without delay.

What happens when I call the EAD hotline?

What happens if I have an emergency animal disease confirmed?

There are a series of steps that are taken once an emergency animal disease is confirmed. The state Chief Veterinary Officer (CVO) will oversee the management of the disease outbreak and will initiate quarantine, movement controls and assessments around your site. The CVO will then alert state emergency-management agencies to activate the animal diseases emergency plan. The CVO will also consult with national counterparts and advisors to seek agreement on the preferred national control strategy.

The Farm Biosecurity website has a dedicated and detailed webpage which outlines everything you need to know about the processes that go in place during an emergency disease outbreak. And, you are also encouraged to visit the Surviving an emergency disease outbreak webpage which will arm you with knowledge you need to be prepared for an outbreak anywhere in Australia.

Remember, apart from a local phone call charge there is no cost to call the EAD watch hotline and making the call regardless of your level of suspicion is better than doing nothing!