What can I feed my pigs?

A commercial pig feed is the best choice for your pigs. However, some pig owners choose to recycle and reduce waste by feeding their pigs food scraps. This is a great way to reduce waste, provided you avoid swill feeding (see below).

Appropriate recycled foods for pigs include:

What is swill (prohibited pig feed)?

Swill, the traditional name for all prohibited pig feed, is food waste containing meat or any other mammalian products or by-products, excluding milk. This also includes imported dairy products and any foods that have been in contact with meat, such as leftover vegetables on a plate from a Sunday roast, or even the leftover ham and cheese roll.

Why can I not feed swill to my pig?

Swill could contain viruses such as African swine fever, foot and mouth disease and Aujeszky’s disease, all of which could have far reaching impacts on Australia’s livestock industry. Avoiding swill is a simple case of ‘prevention is much better and cheaper than the cure’.

It is believed that swill fed to pigs may have caused the outbreak of foot and mouth disease in the UK in 2001. 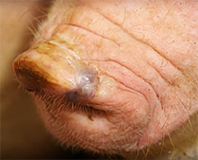 A number of state and territory governments, together with Australian Pork Limited, have put together their own swill feeding material. The list below provides specific swill information from each jurisdiction.

Responsible disposal of food waste: A4

Pig feed: why it is illegal to feed food scraps (swill) to pigs