This is an example scenario of an exotic pest detection and emergency response that is relevant to the plantation industry. It indicates actions that could occur during a response, and the potential impacts on a business. 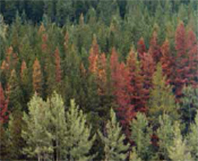 An exotic bark beetle was detected in drought stressed Radiata pine (Pinus radiata) during routine forest health surveys in a regional plantation during late August and was reported to the Exotic Plant Pest Hotline.

The beetle was identified as Mountain pine beetle (Dendroctonus ponderosae). In the past, this insect pest has caused massive damage to Ponderosa pine (Pinus ponderosa) in North American forests. Under conditions that lead to an outbreak, it can kill healthy trees across a wide area, including Loblolly pine (P. taeda) and Slash pine (P. elliottii).

A meeting of the Consultative Committee on Emergency Plant Pests (CCEPP) was convened, which included plant biosecurity experts, forest health experts and industry representatives. The committee agreed that this pest was an Emergency Plant Pest, that it was a significant threat to the forest industry, and an attempt should be made to eradicate it under the terms of the Emergency Plant Pest Response Deed.

A Control Centre was established in the local forestry office in the region where the beetles were detected. This was staffed by state biosecurity officers, emergency response teams, forest health experts, and staff from the forest industry and local state government who assisted in the emergency response. A total of 150 people were involved over the next nine months, with a skeleton staff thereafter for the next two years.

The Control Centre managed the surveillance activities, quarantine area, tracing, and destruction and fumigation operations. A small laboratory was also set-up in the Control Centre to identify beetles collected during the campaign. Contractors were required for some of this work. The Control Centre also liaised with the CCEPP and industry.

Mountain pine beetles are known to disperse over relatively long distances, but can travel further distances via infested material such as bark and logs. Therefore, quarantine restrictions were immediately enforced on the affected and adjacent plantations. This included:

The restrictions were in place for an initial three month period while surveillance determined the distribution of the pest. These restrictions were ongoing for a further two years to ensure that the pest was not spread by the movement of people. 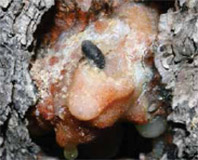 The initial aim of surveys was to determine the distribution of the beetle. Insect traps containing lures for Mountain pine beetle were placed at strategic points within the immediate area of the detection, in the adjacent plantations, and in plantations throughout the region.

Beetles begin to emerge from logs in early spring, and will breed and continue to fly through to late summer. It was essential to determine the extent of the beetle infestation early on, prior to build-up of populations and further spread. Ground surveillance of these areas, together with inspection of dead and dying trees and slash, also occurred.

The origin of the pest and whether it had moved further afield was essential information to decide on the feasibility of eradication. At the time of the detection, harvesting had just begun in the affected plantation, and some unbarked logs had been trucked to a port for export.

The port facilities and logs awaiting shipment were inspected for Mountain pine beetle. Insect traps were also set in the port and surrounding area, where amenity pine trees were growing.

Fumigation and destruction of logs

No logs had been exported that year. Methylbromide was used to fumigate all of the log stacks at the port facility, and logs remaining in the affected and adjacent plantations. Following fumigation, they were chipped and left on site.

Slash within the affected and adjacent plantations was chopper-rolled to break up plant material that could feed and harbour the beetle. Beetles captured in insect traps placed around the port and within the plantations were killed.

A non-commercial thinning operation in a nearby plantation had attracted many beetles (these were detected during the first month of the emergency response surveys). Because of the amount of beetles in the felled trees in this compartment, and the large amount of susceptible material, the entire compartment was felled and burnt.

After three months of trapping and surveillance, it was found that beetles had established in a five kilometre area surrounding the initial detection.

Within six months of detection, all slash and logs in the area, including a two kilometre buffer zone, had been either fumigated or destroyed, significantly reducing material on which the beetles could feed and breed.

Trapping and supplementary surveillance continued in the region for a further two flight seasons. No forest operations were permitted in the quarantine zone during this time.

Mountain pine beetles were caught in traps in the port facility only during the initial flight season following detection.

When no Mountain pine beetles were detected in the third flight season following detection, it was considered to be eradicated from the region, and quarantine restrictions were lifted, allowing normal forestry operations to resume.

In an emergency response, the leading state agency and relevant industry(s) provide in-kind support from their staff.

Additional costs include travel, contractors, chemicals, consumables and vehicles. During the three years of the response, these additional costs amounted to $5 million. Not included in this amount is the costs incurred by the grower for lost production due to restrictions on harvesting within the quarantine zone, nor the financial impact of losing the overseas contract to supply logs.