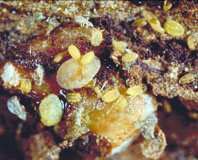 Grape phylloxera (Daktulosphaira vitifoliae) is one of the world’s most damaging grapevine pests and is therefore an important biosecurity issue for the Australian viticulture industry.

Phylloxera is a small (<1 mm long) aphidlike insect. In Australia it lives and feeds exclusively on the roots of grapevines and occasionally in distinctive galls on grapevine leaves.

Phylloxera originates from eastern North America, where it lives on a range of native grapevine species. However, the insect is now present in most of the world’s viticultural regions, originally as a result of the movement of phylloxera infested grapevine planting material in the late 1800’s. European grapevines (Vitis vinifera) have little or no tolerance to phylloxera feeding and almost always die.

Phylloxera sucks sap from vine root tissue, which leads to the development of yellow, fleshy galls (nodosities) on young non-lignified feeder roots, and brown galls (tuberosities) on older lignified storage roots. Feeding by phylloxera over several years leads to the death of fibrous feeder roots, cracking of older storage roots and secondary root necrosis due to entry of fungal pathogens from the soil. Infested vines gradually lose vigour, turn yellow and become stunted, with new shoots failing to emerge. It can result in the gradual death of the vine.

Phylloxera was first detected in Australia, in Geelong, Victoria in 1877. Today, it is confined to a few areas in Victoria and NSW.

In NSW, there is the Sydney region PIZ (counties of Cumberland and Camden) and the Albury–Corowa PIZ. NOTE: the boundaries of the phylloxera zones can change as new reports of the disease are confirmed.

To prevent the spread of phylloxera from infested areas, each state and territory has legislation and associated regulations which restrict or prohibit the movement of ‘phylloxera risk vectors’ – ie things that could carry phylloxera. This includes grapevine material, grape products and vineyard or winery equipment and machinery.

Each state and territory has slightly different legislation. Anyone wishing to move any risk products between states and territories must comply with the legislation of the destination state or territory.

The National Vine Health Steering Committee developed the National Phylloxera Management Protocol (latest version endorsed October 2009). The protocol aims to reduce the risk of phylloxera spread, while at the same time providing a consistent, technically justified framework for the movement of grapevines, grapevine material and potentially contaminated items between grape growing regions of different phylloxera status. The end goal is for this national protocol to be expanded and accepted by all states and territories, as the basis from which consistent legislation and integrated regulations for the movement of phylloxera risk vectors are developed.

In 2012, the National Viticulture Biosecurity Committee was formed to update and implement the National Phylloxera Management Protocol, as well as many other biosecurity related viticulture industry issues. Membership of this committee includes representatives from the wine grape, table grape, dried fruit and nursery industries, as well as representatives from state and territory governments, the Australian Government and other industry organisations such as Plant Health Australia.

The value of good quality planting material to a vineyard cannot be overestimated. Quality vines and planting material are the foundation of a productive, economically viable vineyard. Well managed quality vines will establish quickly and consistently produce high quality fruit with minimum inputs. This results in even, long lived vineyards.