The team of regionally-based managers provide tools and information to help livestock producers in the areas of biosecurity, traceability, disease surveillance and animal welfare.

Grain growers across Australia are fortunate to have access to biosecurity advice specifically for their industry from Grains Farm Biosecurity Officers in each of the main grain growing states. Officers can work one-on-one with growers to explain simple yet effective ways they can reduce the risks posed by pests, weeds and diseases.

The Grains Farm Biosecurity Program is managed by Plant Health Australia and funded by growers through Grain Producers Australia together with the New South Wales, Queensland, South Australian, Victorian and Western Australian governments.

For advice on any aspect of biosecurity, growers should contact their local Grains Biosecurity Officer. 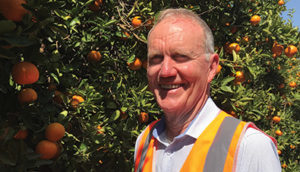 In partnership with Citrus Australia, Surveillance Coordinator Jeff Milne was employed mid-2018 as part of the National Citrus Biosecurity Program, which is funded by Hort Innovation and the Department of Agriculture through the Agricultural Competitiveness White Paper.

Jeff’s role is to raise awareness of biosecurity in the citrus industry and in urban and peri-urban communities. The vegetable and potato grower levies fund the Vegetable and Potato Biosecurity Program, managed by AUSVEG and Plant Health Australia.

The Vegetable and Potato Biosecurity Officers, who work for AUSVEG, aim to improve the biosecurity risk, preparedness and response mechanisms within the vegetable and potato industries. They facilitate cooperation between vegetable and potato growers, government departments and industry groups, carry out ad hoc projects and provide advice as required.

More information about the officers and the program is available on the AUSVEG website.

To help beekeepers to implement biosecurity measures and to ensure that they are complying with the Australian Honey Bee Industry Biosecurity Code of Practice and relevant legislation, Bee Biosecurity Officers are employed within six state departments of primary industry.

To contact a Bee Biosecurity Officer, and for more information about the code of practice, pollination of crops by honey bees, pests, news and videos, go to the BeeAware website. Other industries – for example Nursery and Garden Industry Australia, Melons Australia and Mangoes Australia – have appointed specialists to help growers to implement biosecurity measures on-farm. Please contact your peak industry body for further details, and don’t hesitate to take advantage of the biosecurity advice on offer.