The Queensland city of Townsville is on alert after varroa mites (Varroa jacobsoni) were found in a feral Asian honey bee hive spotted by stevedores in a container stand on 27 June at the Port of Townsville.

Not long after, another nest was found in a bird nesting box in a backyard about 9 kilometres away in Annandale. Both of the hives have been examined thoroughly and destroyed.

Although the Asian honey bees are of concern, the real focus of the response is the mites that they were carrying, and pathogens that the mites are capable of carrying.

Varroa mites are a serious pest and a threat to the local honey bee industry and plant industries that rely on bees for pollination.

It’s important to note that these mites are not Varroa destructor, which is the mite that has spread around the world with devastating consequences for European honey bees. The natural host for V. jacobsoni is the Asian honey bee, and it’s thought that this kind of varroa mite does not readily move to European honey bees.

The initial biosecurity zone was a 10 kilometre circle from the inner-city where the first hive was found, but that was extended to include another 10 kilometre area around the second nest. After weeks of intensive surveillance this is the only new hive of Asian honey bees to be located. Photo: Biosecurity Queensland

More than 60 beekeepers and interested people gathered in Townsville on 12 July for an update on the emergency response. The audience heard from the Biosecurity Queensland Varroa Mite Response Team and the Australian Honey Bee Industry Council.

The response includes surveillance of managed and feral hives, and setting traps to attract bees to check for the presence of varroa mite. A number of surveillance methods are being used, including aerial balloons that attract male Asian honey bees with a queen pheromone trap, sweep netting of flowering plants that are visited by the bees and setting up feeding stations to attract foraging bees.

Restrictions have been imposed on the movement of bee hives, bees, bee products (excluding honey), and used bee keeping equipment from the Townsville area to prevent the mite from spreading.

Commercial and hobby beekeepers are asked to check their hives and report symptoms immediately to Biosecurity Queensland on 13 25 23. 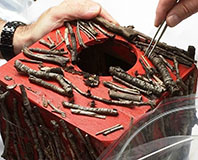 Dr Ashley Bunce, Director, Varroa Mite Response, said that after weeks of intensive surveillance only two hives have been located.

“Laboratory testing confirmed that the Asian honey bees found at Annandale are related to the original hive found at the port,” Dr Bunce said.

Testing also indicates that the bees, like the Asian honey bees now established around Cairns, are likely to have come from Papua New Guinea.

“We continue to urge local residents to check their yards and let us know if they see any bee activity.”

The finding of a second nest has caused a small army of bee hunters to take to the streets of Townsville in search of Asian honey bees.

“We now have 12 additional surveillance officers with bee keeping experience working with our Biosecurity Inspectors scouring parks, streets and other public land for any signs of feral bees,” Mr Bunce said.

“There’s also been a fantastic response from the Townsville public wanting to assist in eradicating varroa mites, and anyone with beekeeping experience who wishes to be part of the surveillance effort should contact us on 13 25 23.

“We’re very grateful to the Birdlife Townsville group which is doing its bit by collecting the pellets of Rainbow bee-eater birds at roosting sites at Annandale, Anderson Gardens and the Townsville Common. 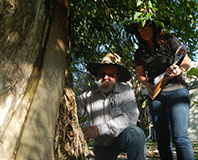 “Examining the pellets from these birds is a surveillance method used to detect the presence of Asian honey bees within the feeding range of the birds.”

Mr Bunce said the success of any response to a pest or disease outbreak was highly dependent on the cooperation of the affected industry and the local community.

“We’re asking commercial and hobby beekeepers to check their hives and report any signs of mite activity to Biosecurity Queensland on 13 25 23,” he said.

“The community can also help by reporting feral nests so that they can be checked and destroyed.”

Information about bee biosecurity, hive care, and photos that will help you identify varroa mite, is available from BeeAware site.

More information on Asian honey bees, their appearance and associated symptoms once infected with varroa mites is available from the Biosecurity Queensland site.