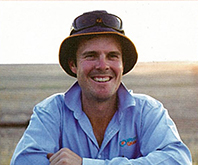 Thinking about biosecurity in day-to-day farming operations has been vital to the success of the 12,000 hectares owned and operated by Queensland grain grower and 2010 Australian Biosecurity Farmer of the Year finalist, Angus Woods.

The on-farm biosecurity practices adopted by Mr Woods and his family provide effective models for other Australian grain growers to follow.

When combined, these practices create an effective framework – one that demonstrates how farm hygiene and biosecurity measures can be implemented into daily activities of large farming enterprises without compromising efficiency.

“In our business, biosecurity activities are not a big deal, they’re just good practice. Because crops are targeted for seed and other high value markets, we recognised the importance of protecting our property from pests and diseases,” says Mr Woods.

It is hoped that other farmers will follow Angus’ lead and see the value of implementing good biosecurity practices, while finding out more about what can be done to manage pest, disease and weed threats.

Mr Woods’ company, Woods Pastoral, is the farming component of the larger, Australian agribusiness company, The Woods Group. Woods Pastoral specialises in the production of cereal and pulse crops into high value markets such as seed for sowing, containerised exports and stock feed. The main crops grown are wheat, sorghum, chickpeas and barley.

“Having a large operation spread across the four properties means we often share machinery and use quite a few different contractors when we plant and harvest the crops,” says Mr Woods.

“We recognised that the size of the enterprise could potentially threaten its biosecurity, via the contamination of seeds and the introduction of pests and diseases on equipment for example.”

In order to safeguard his properties from pests and diseases, Mr Woods developed and implemented his own biosecurity initiative – a Full Traceability and Quality Assurance (FTQA) System.