Are you feeding your poddy calf appropriately?

Are you feeding your poddy calf appropriately? 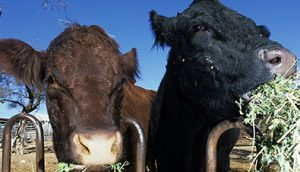 Do you know the long-term consequences of what you feed your animals? Animal Health Australia (AHA) are reminding producers and hobby farmers of Australia’s Ruminant Feed Ban, which prohibits the feeding of animal material to ruminant livestock, including cattle, sheep, goats and deer.

Dr Rob Barwell, AHA’s Senior Manager Biosecurity, said that the ban was introduced to prevent the possible spread of bovine spongiform encephalopathy (commonly known as BSE or ‘mad cow disease’) if it were ever introduced to Australia, and that it remains vitally important.

“BSE prions can persist in meat, bone and blood, even when these products are rendered,” Dr Barwell said.

“While we don’t import these products from countries with BSE, our nationwide ban remains a failsafe in case something slips through the cracks.”

Restricted Animal Material (RAM) is any material taken from a vertebrate animal – a category which includes poultry and fish – with the exception of milk products, gelatin and tallow or oils which are treated in accordance with certain industry standards.

“It’s vitally important that ruminants don’t have access to these feeds at any stage.”

Although the Ruminant Feed Ban aims to prevent disease being amplified among commercial herds and entering the human food chain, Dr Barwell was eager to point out that it applies to all ruminant species, including hand-reared and pet cattle and sheep.

“Even if the animals are not bound for the abattoir, the ban is important and still applies.”

Dr Barwell also explained that, while much of the focus of the ban was on stockfeeds, the definition of RAM was much broader than just meat, blood and bone meals. It encompasses all vertebrate animal products – such as eggs – which might be found in less traditional food sources.

“The rule of thumb is that if it comes from an animal with a backbone, it’s off-limits unless you’re told otherwise. Your best bet for feeding your animals is an accredited RAM-free stockfeed from a reputable supplier.”

Failure to comply with the Ruminant Feed Ban carries hefty penalties and can impact your access to domestic and overseas markets, as the National Vendor Declaration can’t be signed if RAM has been fed to the ruminants for sale

“This ban is about not just animal health but also potentially human health,” Dr Barwell said.

“If you own animals, it’s your responsibility to ensure that they are being fed correctly. This means ensuring they aren’t eating RAM at any point.”

Find out more about preventing diseases entering your property and impacting your livestock on Farm Biosecurity’s ‘Farm Inputs’ page.