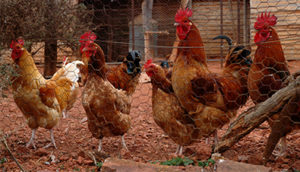 An outbreak of an emergency animal disease (EAD) is a serious, though thankfully uncommon, occurrence, thanks to Australia’s geographic isolation and strong biosecurity measures at the border. However, there is no such thing as zero risk, particularly when it comes to diseases which can be harboured and transmitted by wildlife.

Recent detections of avian influenza (AI) in Victoria have prompted Animal Health Australia (AHA) to issue a reminder to bird owners to take biosecurity seriously, even if they only have backyard hens.

“Australia has had a number of instances of AI over the past few decades, all of which have been eliminated in commercially farmed flocks,” said Dr Simon Humphrys, Executive Manager Biosecurity and Product Integrity at AHA.

“However, many species of wild birds can carry the virus, some without showing any signs of illness, and transmit it to domestic chickens, ducks and turkeys.”

AI is caused by one of the influenza viruses, a family of viruses which, in people, are responsible for the disease we know as the flu. Influenza viruses can also affect pigs and horses, among other species.

In birds, the severity of the disease varies considerably depending on the strain of the virus. The H7N7, H7N6 and H5N2 strains which have been found in Victoria are an example of this.

On the other hand, H7N6 and H5N2 cause Low Pathogenicity Avian Influenza (LPAI), which results in much milder symptoms and lower mortality. LPAI strains can go undetected in some species which show little to no signs of being unwell.

“It is believed that commercial farms become infected through contact with wild birds, especially waterfowl such as ducks and geese,” Dr Humphrys explained.

“When that happens, it triggers a biosecurity emergency response under Australia’s EAD response arrangements. These pre-existing agreements enable governments and affected industries to mount a rapid and effective response to an EAD.”

While movement and control orders are in place in certain parts of Victoria, Dr Humphrys is eager to remind all bird owners of the importance of vigilance and good biosecurity.

“Obviously if you’re within an area under a control order, as determined by Agriculture Victoria, you need to follow the instructions of the biosecurity emergency response team,” he said.

“But regardless of where you are, if you have farmed or pet poultry, there’s some simple steps you can take to minimise the risk of your birds becoming sick.”

Measures such as keeping poultry from mingling with other birds, regularly cleaning and disinfecting their housing, and maintaining clean and fresh food and water bowls can help keep your birds from becoming sick.

Importantly, limit close contact between your birds and people, especially if either is showing signs of being unwell.

“While rare for most strains, influenza viruses can cross from birds to people and back again, though this requires very close contact,” Dr Humphrys explained.

“Thankfully there is no evidence to suggest that the H5N1 strain, which has made global headlines since the mid-2000s, has ever been present in Australian birds.”

If you have had close contact with a sick bird and are presenting with cold or flu symptoms, call your doctor or state or territory health authorities.

Avian influenza is a notifiable disease. Suspected cases in poultry can be reported to your state or territory animal health agencies via the Emergency Animal Disease Watch Hotline: 1800 675 888.