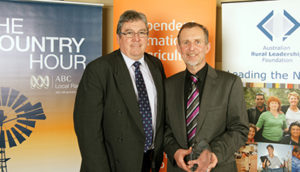 Murraylands onion grower Steve Rathjen is the winner of the Plant Biosecurity Farmer of the Year Award.

Mr Rathjen has been producing onions in the Murray Bridge and Bordertown regions of South Australia for many years. But his interest in biosecurity goes well beyond his farm gate, having been involved in biosecurity planning for the whole onion industry.

As President of Onions Australia from 2006-08, Mr Rathjen was involved in the development of the onion industry strategic plan, something he was very passionate about. He has been an Onion Industry Advisory Committee member for South Australia since 2008.

Mr Rathjen has worked tirelessly with government representatives in an attempt to eradicate onion smut which was last detected in South Australia in 2002. It is expected that quarantine restrictions on the last few remaining sites will be finally lifted in 2017.

“Steve’s efforts have contributed to ensuring that markets remain open to all South Australian producers, who grew nearly half of the 250,000 tonnes of onions harvested in Australia last year,” said Greg Fraser, CEO of Plant Health Australia, sponsor of the award.

“The absence of further outbreaks of onion smut in South Australia is a reflection of improved on-farm hygiene measures,” he said.

On his own property, Steve has dedicated farm vehicles and he uses signage to make sure visitors are aware of the need to adhere to biosecurity practices.

“Soil contamination on harvest bins is a well-known link in spreading the disease from growers to packing sheds, so it’s important that harvest bins are well maintained, cleaned thoroughly and do not leave the property,” said Mr Rathjen.

Mr Rathjen is open-minded when it comes to biosecurity and says he is a firm believer in trialling new measures. He was instrumental in setting up the onion research and development levy, and was a participant in its recent review.

He has also hosted field trials as part of the Mallee onion stunt research and development project, working closely with SARDI on the pre-sowing preparation of crops to hinder the disease.

Steve admits to being a big fan of integrated pest management.

“A number of years ago I suffered up to 60 per cent damage to my onion and sweet corn crops from Heliothis,” he said.

He had to use an extensive range of chemicals to combat the pest.

“It took four years, but after introducing integrated pest management I no longer needed to use chemicals to control Heliothis,” he said.