Balancing rights and responsibilities on the land

Balancing rights and responsibilities on the land 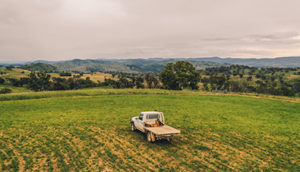 When it comes to on-farm biosecurity it is often said that if it moves, it can carry diseases, pests and weeds. The movement of people, vehicles and equipment creates a high risk of a biosecurity incursion, second only to the introduction of new plants, livestock and farm supplies (such as feed). With governments encouraging people to travel within Australia (despite constantly changing COVID-19 restrictions), Animal Health Australia (AHA) is encouraging all people to consider the impact their actions have on rural environments.

“If there’s one thing we would hope everyone has taken away from the pandemic, it’s how big an impact one person can have on a disease outbreak in a very small amount of time,” says Dr Rob Barwell, AHA’s Senior Manager Biosecurity.

“Though biosecurity threats are often ‘invisible’ we need people to acknowledge that, even when acting with the best of intentions, they could be creating a risk to landholders’ businesses.”

A change in legislation recently passed by Victoria’s parliament removed the prohibition on members of the public camping on Crown land which has water frontage and is licensed to an adjoining landholder to be grazed or managed. While this is great for public amenity it also creates much higher biosecurity risks that industry have highlighted may not be manageable for producers.

“What we see in this instance and others like it is the challenges faced when landholders and the general public both have rights and responsibilities,” Dr Barwell explained.

“While landholders must balance the legal right of access to the land with the biosecurity implications of that access, visitors also need to take responsibility for their own actions — this is especially true in Queensland and New South Wales where all people have a legal obligation or duty to protect biosecurity.”

Simple biosecurity measures, chief among them being cleaning up and removing any rubbish you produce, can go a long way to preserving the goodwill on all sides and preventing a biosecurity incident. Dr Barwell is encouraging members of the public to work with landholders in securing farms to protect not only individual businesses, but the wider industry as a whole.

This includes respecting gates and fences, following instructions on posted signage, and keeping clear of any livestock grazing in the area.

“In the end it boils down to common sense — when passing through or near to private property on the way to enjoy the great outdoors, treat the area like you would a nature reserve or a national park. As the saying goes, take nothing but photos and leave nothing but footprints.”

For landholders, the message itself is simple, but may be easier said than done; manage the risks like you would a public road or utility infrastructure passing through the property.

“Where a right of access exists, factor this into your biosecurity plan and put steps in place to manage the risks,” Dr Barwell said.

“This might include double-fencing the high-risk area, creating an access corridor, and regularly monitoring the area and nearby crops and livestock for signs of diseases, pests and weeds which might have been brought in by a recreational visitor.”

Find out more about managing people, vehicles and equipment on the Farm Biosecurity website.