Big bucks in rangeland goats, but what about biosecurity?

Big bucks in rangeland goats, but what about biosecurity? 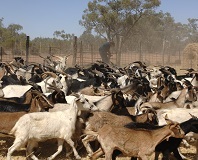 Mustering rangeland goats has become an important source of income for many producers, fueled by a rising international demand for goat meat and a handy rise in prices over the last decade.

However, producers should exercise caution when rounding up and selling a mob, according to Animal Health Australia’s Senior Manager Biosecurity, Dr Rob Barwell.

“Having rangeland goats on your property poses a biosecurity risk, which needs to be managed appropriately,” Dr Barwell explained.

“Rangeland goats are those who were born and bred in the wild, with no human intervention or interaction. This means you often don’t know where they’ve come from, what parasites/diseases they got, or what weed seeds they’re carrying. It also makes them difficult to identify and keep a track of, especially when they move from property to property,” says Dr Barwell.

“They can also damage fences, increasing the risks posed by other wild animals.”

Rangeland goats may be transported from the property on which they were caught directly to an abattoir or registered depot, without needing National Livestock Identification System tags.

However, they must be accompanied by a National Vendor Declaration, providing some details as to their history.

“Since we can’t trace individual animals, we have to be very careful to control where the mob might roam,” says Dr Barwell.

Chemical residues are a key concern in animals meant for human consumption. Producers are required to ensure that animals have not been exposed to chemical fertilisers, pesticides or contaminated dump sites.

“In the event of a biosecurity or food safety incident, we must be clear about where the goats have come from and provide assurances that other livestock on the property of origin have not been exposed.”

“It’s important to ensure that any contaminated sites are inaccessible to animals destined for the abattoir,” Dr Barwell explains.

“Likewise, producers should work to minimise contact between their livestock and feral animals which may be carrying disease agents.”