Biosecurity and the circle of influence

Biosecurity and the circle of influence

The biosecurity environment is a complex space, with many stakeholders having a vested interest in protecting the agricultural industries and the environment from pest, weed and disease incursion. Sometimes producers can get caught up in thinking about biosecurity threats and issues that are happening beyond the farm gate and misplace their energy worrying about things that are beyond their control.

The “circle of influence” is an effective way to think about what producers can control, what they can influence, and what may be of concern but is beyond the producer’s control and/or influence. 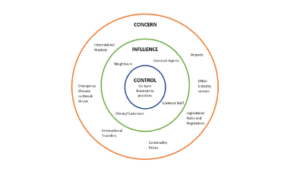 There are many factors that can concern producers, but they will have little or no control over. For example, the ever-present threat of an emergency animal or plant disease outbreak, or the entry points for pests, weeds, and disease in Australia. Although there are organisations which help to monitor the entry points and intercept material that pose a threat to Australia’s biosecurity, producers are not involved directly in that process.

Similarly, there are several factors that producers can influence but not necessarily control. The main area of influence a producer has with regards to biosecurity is among people they interact with through their business, such as contract staff, livestock agents and neighbours. Producers may have particular expectations of how these external parties should act to minimise the threat of pest, weed and disease incursion. For example, producers may have an agreement with their neighbours about weed management on roadsides or boundary fences, or have talked about pest animal management for their area. Producers may also ask contract staff or livestock agents to leave their vehicle at the property boundary and travel in the producer’s vehicle with them, or, where this is not possible, to wash down all vehicles and equipment before entering the production zone.

There is, however, one area that producers have total control over and that is the biosecurity practices they carry out within their business. When controlling and minimising the risk of a pest, weed or disease incursion, it’s important for producers to consider which practices are a priority for their unique circumstances. Capturing the practices producers are using on-farm in a biosecurity plan also helps to show other interested parties how they are helping to strengthen biosecurity for their region and industry more broadly.

For tips on how to increase the level of control you have over biosecurity risks, head to the biosecurity tool kit page.