Biosecurity can make or break a farm, but it’s life or death for livestock!

Biosecurity can make or break a farm, but it’s life or death for livestock! 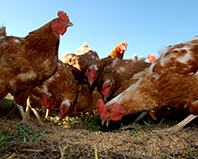 Biosecurity signs have popped up on farm gates around the country as graziers continue to secure their farms against disease, pest and weed threats. Yet for many producers, especially in what’s known as the intensive livestock industries, these signs are commonplace, and have been for some time.

That’s because farmers raising animals in close contact with one another and with people face greater consequences in the event of a biosecurity incursion, says Dr Rob Barwell, Animal Health Australia’s Senior Manager for Biosecurity. Due to the nature of their farming system, strict protocols must be adhered to.

“Some intensive farms, such as egg farms and dairies, are designed to regularly collect animal products,” Dr Barwell explained.

One central collection point, in this case a laying barn or milking shed, makes it possible to do this efficiently, but also necessitates animals coming together in these spaces daily, at the very least.

“However, when you have this many animals – remembering that being economically viable and meeting demand requires scale and that will normally mean lots of layers or milkers – in a small space, the potential for illness to move through the flock or herd becomes much greater.”

Other intensive farms, like those specialising in pigs and broiler (i.e. meat) chickens, keep animals in controlled conditions due to their livestock’s potential susceptibility to disease.

“Most significant is influenza – control costs for avian and swine flu outbreaks are often huge in Australia and overseas,” Dr Barwell said.

“Vaccination for human flu is amongst the most important yearly rituals for staff in these facilities, especially given how easily influenza mutates and passes between humans and animals.”

Other zoonotic diseases can pose an even more serious threat to human health, including Q Fever and leptospirosis. These create a significant workplace health and safety risk for staff.

As a result, biosecurity is a huge concern for staff and visitors to piggeries, chicken and egg farms, dairies and feedlots, or anywhere animals and people come into regular close contact. Practices such as providing dedicated equipment and boots, making use of footbaths and strict hygiene protocols including personal protective equipment – known as PPE – have been standard in many of these facilities for decades.

“This isn’t just rules and regulations, biosecurity is best practice in livestock production because in many cases it’s the line between success and failure for the farmer, life and death for the animals,” said Dr Barwell.

“We all need to respect that, and it’s great to see so many other livestock producers taking these practices on board on their own properties.”

Producers wanting to know more about biosecurity for intensive livestock properties can visit the following pages: