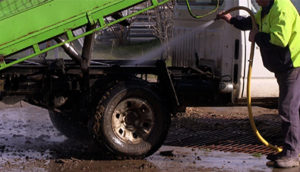 Preventing the introduction and spread of diseases, pests and weeds has been a big topic for our livestock industries over the past few years. Several states have introduced biosecurity responsibilities in legislation, quality assurance programs have added or improved their biosecurity modules, and the threat of exotic diseases reaching Australia is always increasing.

Though you’ll find plenty of resources on the Farm Biosecurity website for creating a biosecurity plan, a plan in itself doesn’t offer any additional protection against an outbreak. What’s most important is making that commitment to assessing risks and taking action to address them.

Biosecurity is just one part of farm management, and many producers are taking some form of biosecurity action every day, according to Animal Health Australia’s Senior Manager Biosecurity, Dr Rob Barwell.

“Many planning tools or templates recommend actions to be taken at key moments, such as when new livestock, plant material, people and vehicles come on to the property,” Dr Barwell said.

“Most of those actions may mean a small tweak or change to how you’d be managing that situation in any case, so taking the path which creates the least risk of an outbreak shouldn’t be too challenging or too onerous.”

Dr Barwell explains that many common-sense activities on farms – things like maintaining clean and effective infrastructure and equipment, practicing good hygiene, and keeping an eye out for things that have gone wrong – are all standard practice and are part of addressing ongoing biosecurity risks.

However other things that happen less frequently – such as buying or selling livestock, bringing in feed, or welcoming visitors – can create a biosecurity risk, and should be addressed.

“We’ve taken a lot of calls and attended a lot of workshops about biosecurity planning, especially in the last three or so years,” said Dr Barwell.

“What we always try to tell people is that having a biosecurity plan in place isn’t just about the document itself; it’s about actively working your way through the activities and procedures that you’ve identified, which will keep your risk at an acceptable level for your risk tolerances.”

Though having a biosecurity plan in place is a requirement of some government regulations and industry QA programs, biosecurity isn’t a status or a classification that you reach; that is, there’s no such thing as being absolutely or even mostly ‘biosecure’.

“Creating a plan is simply the first step, it’s akin to estimating what you might reasonably have to deal with on a road trip and then packing the car with the right tools and resources, so to speak,” said Dr Barwell.

“To be taking biosecurity seriously is to make it part of your farm management, make those practices second nature, and really take control of the risks that are present for your business.”

Find out more about the six essentials of on-farm biosecurity at the Farm Biosecurity website.