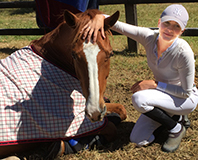 WA champion show jump rider Stef Tucker is no stranger to biosecurity when taking animals to the show.  Stef has just trucked two horses and a pony from Perth to Sydney where she will compete in the Sydney Royal Easter Show, starting this week. Before she returns home however, Stef has to drench her animals for liver fluke at Port Augusta and stop in at Kalgoorlie for health checks.

Animal Health Australia’s Executive Manager Biosecurity and Product Integrity Services, Duncan Rowland, said Stef’s journey is a timely reminder about the importance of maintaining biosecurity when taking animals to the show – no matter how far you have to travel.

“There is a biosecurity risk whenever animals from different properties are brought together in common locations such as shows, saleyards and other events, but there are a number of measures producers can take to limit the risk,” Mr Rowland said.

“Diseases may be directly transmitted among animals and carried back to other properties. For example, transporting animals for others, or allowing direct contact, greatly increases the chance of transmitting a disease.

“Diseases and pests can also be transmitted on contaminated boots and clothing, feeding and grooming equipment, tack, pens, feed and other common objects that come into contact with livestock at shows.

“To avoid disease spread, it is recommended that producers do not allow their livestock to use communal water troughs, graze on the event grounds or consume hay on the ground,” Mr Rowland said.

Mr Rowland highlighted that biosecurity doesn’t stop when producers leave the show either.

“Transport vehicles should be thoroughly cleaned before returning home and immediately upon return.”

“As the signs of many diseases emerge days later, keeping returned stock quarantined for a period of 21 days is one of the simplest ways producers can protect both their livestock and their livelihood.”

“Similar precautions should be taken with any fodder brought back with you. Inspecting fodder for pests and weeds when purchasing, and isolating new fodder when it comes on to your property to check for the germination of any weeds, will help prevent the spread of weeds or pests that may contaminate your property,” Mr Rowland said.