Clean vehicles a must for weed biosecurity

Clean vehicles a must for weed biosecurity 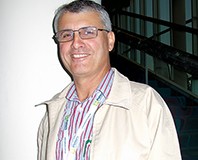 The latest casualties in the war on weeds at Peter Mifsud’s property north of Clermont, in Central Queensland, are the contractors who once helped to harvest the crops on his 3900-hectare property.

“About two years ago we decided to stop using contract harvesters; the risk is just not worth it,” says Peter, who has strict biosecurity protocols in place as part of efforts to control weeds.

“To clean down a header properly you need to be thorough and make sure you remove guards, check the bins and augers, and blow everything down properly. One contractor told us they were clean and when we removed the guards we found a whole range of different seeds including maize still caught in there.”

Weeds have been the main focus of Peter’s biosecurity efforts since the family bought the Clermont property in 1979, with feathertop Rhodes grass his latest concern. It has become widespread throughout Central Queensland, particularly on red soil types. “It is just about everywhere, and when you see where the seeds can hide you realise why,” he says.

Limiting vehicle access to his property, regular vehicle inspections and requests to clean vehicles at designated clean-down sites are all part of his biosecurity strategy. Service providers such as agronomists are also asked to use farm vehicles rather than their own when doing crop inspections.

“We have signs on the gates to the major property entrances but you still have to be strict with inspections; it is surprising how dirty some vehicles can be. It is not possible to stop movement completely, you just need to find the best possible outcome,” Peter says.

With a council road, two regional powerlines and a railway line through the property, it has taken some considerable negotiation to put a working plan in place. This has included ensuring the council sprays roadside weeds and that Queensland Rail controls weeds on its easements.

Initially Queensland Rail would burn the grass along the line and grade the verges, which disturbed the soil and promoted weed growth. Now it slashes from the fence to the railway line, which is much more effective in reducing weed-seed burden as it maintains the grass cover. Peter has recently invested in a precision weed sprayer that uses a near-infrared light source to sense chlorophyll in the weeds and target sprays.

“It is a big investment but we just have to get on top of the weeds. You can’t afford to miss anything. One operator on a tractor with a sprayer can’t look both ways at once, but the cameras can and they don’t miss anything.” The sprayer is the latest technology on the market and the infrared light source means spraying at night is ideal.

Target-spraying weeds is also proving more cost effective, as it uses less chemical than blanket spraying and allows higher label rates of chemical to be applied to maximise weed kill. It also allows them to continue spraying for up to eight hours without having to refill, if there are not many weeds.

“However, it is far more effective to keep weeds and pests off your property than it is to eradicate them when they get established,” he says.

Article reproduced with the permission of Grains Research and Development Corporation