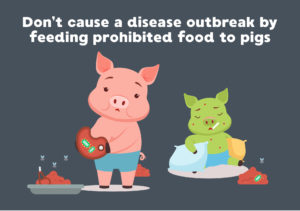 There’s no denying that the reduction of food waste is important for environmental and sustainability factors, which has seen an increase in consumer demand and corporate responsibility to implement programs to minimise food waste. However, did you know there’s potential risks to animal health from improper recycling of certain food products?

One of these risks includes providing prohibited pig feed (commonly known as swill) to pigs. Prohibited pig feed is any product that contains or has come into contact with meat – such as the leftovers on a plate of food, contains imported dairy product, untreated used cooking oils, bakery waste or restaurant waste.

“Some of the programs used to minimise food waste can include farmer programs, where the food waste is provided to farmers for use as stock feed or composting. While it may seem like a harmless way to pay it forward, providing your retail or hospitality waste as pig feed can have devastating consequences for the broader Australian livestock industry,”

“Swill may contain a range of harmful viruses and by providing it to the community, you’re possibly opening the door to several highly infectious emergency animal diseases (EADs) that are not currently found in Australia,”

One of these EADs is African swine fever (ASF) which has been marching its way through domestic and wild pig populations throughout China, south-east Asia and parts of eastern Europe, causing devastating losses to the global pig population and production chain. Swill feeding is also thought to be the cause of the 2001 foot and mouth disease (FMD) outbreak in the United Kingdom, leading to the destruction of over six million animals. Neither of these diseases are currently found in Australia, but food containing these viruses and others may be illegally imported and undetected by quarantine and would have a serious impact on Australia’s agriculture.

There’s a good reason why providing swill has a national ban and is illegal across Australia. There are strict laws controlling the collection, storage, treatment and disposal of food substances for pigs (and ruminants) that everyone involved in the hospitality industry should be aware of – or be prepared to face heavy fines if found in non-compliance.

“There’s significant penalties that vary by state and territory if you’re found supplying swill, and can even extend to people who are aware the practice is happening, but haven’t reported the activity.”

“Stores engaging in food recycling programs or not disposing of food waste correctly are encouraged to be responsible, educate their staff on the risks to the business and demonstrate best practice when disposing of food waste. Food waste that would be considered swill should be disposed of in the appropriate bin for landfill collection or composting at an appropriate recycling facility,” Said Dr Barwell.

Businesses in the hospitality sector have a legal responsibility to dispose of food waste correctly, helping to avoid a serious biosecurity incursion. So, while it might seem like a harmless act, think about how you would feel if you caused an outbreak of ASF or FMD in Australia.

For more information visit the Feeding Your Pigs page or view the Business guide to managing the biosecurity risks of food recycling in Australia.