Farm biosecurity is business as usual for growers

Farm biosecurity is business as usual for growers

Vegetable and potato growers Tim Carnell and Scott Rockliff may run businesses at opposite ends of Australia, but they are both aware of the biosecurity measures that are important to them.

Here they share their approach to running a farming business, including their take on biosecurity and how it is incorporated into their operations. 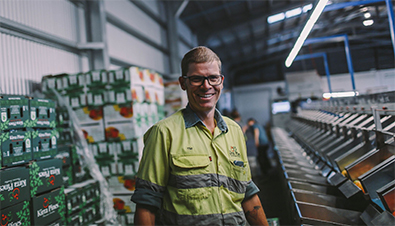 Tim Carnell: “We all feel a little bit immune on our farms and think that it won’t happen to us.” Photo: Cory Rossiter (coryrossiter.com.au)

Escaping Cyclone Debbie’s wrath earlier this year brought a sigh of relief to Tim and the Kirra Pines Farming team, with the operation covering seven farms in three growing areas within a 35 kilometre radius.

As a third-generation grower, Tim (who runs the growing operation with his wife Felicity and parents Trevor and Alison) employs 130-150 staff in the peak season alongside 15-20 full-time staff.

Kirra Pines Farming has its own in-house biosecurity policy, as there is a lot of movement between farms. This includes protocols on general hygiene, farm hygiene and the cleanliness of machinery and infrastructure.

Staff are conscious to keep the movement of equipment between farms to a minimum and wash machinery if transported, while all contractors receive a biosecurity induction.

“Certainly, biosecurity is something that we’ve got to be aware of. We all feel a little bit immune on our farms and think that it won’t happen to us. However, we’ve seen in recent times certain disease outbreaks around Australia and the world in horticultural crops, so we need to be on the front foot with those,” Tim explains.

“You’ve got people entering the farms who need to be aware of keeping to the designated areas.” 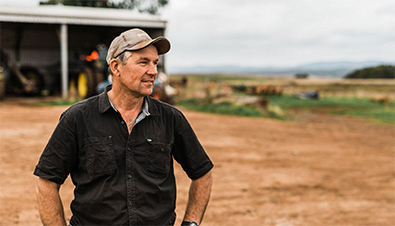 Scott Rockliff: “You’ve just got to keep your finger on the pulse if you can. Otherwise it’ll turn around and bite you.” Photo: Flick + Dave Photography (www.flickplusdavephotography.com)

For six generations, the Rockliff family has been growing potatoes along the north-west coast of Tasmania in Sassafras, a 200-year-old town renowned for its food and wine production.

After taking over the management of Skelbrook Produce from his father Bill around six years ago, Scott and his wife Belinda now operate a potato contract planting and harvesting operation, together with a freight transporting business that carries potatoes (along with other freighting opportunities). Skelbrook Produce consists of two farms spanning 350 and 200 acres respectively.

The contracting business digs about 8,000 tonnes of potatoes annually alongside Scott’s freighting venture, which has grown significantly in recent years.

In the biosecurity space, maintaining disease resistance on-farm is important as well as keeping pests at bay.

“We rake up trash from the crops and burn it once the crops have been harvested, particularly with the poppies. We do the same with wheat crops; some wheat crops we leave through the winter as a cover crop,” Scott says about his farm biosecurity measures.

“You have to try and keep your gear as clean as you can from farm to farm and know which weeds are in different paddocks. You’ve just got to keep your finger on the pulse if you can. Otherwise it’ll turn around and bite you.”

Scott points to the latest fruit fly incursion in Tasmania and tomato potato psyllid, which was discovered in Western Australia in 2017.

“Our biggest concern is now the fruit fly is here, we then worry about the tomato potato psyllid and whether it’s going to come into Tasmania or not. Hopefully it won’t, but who knows?” he says.

“Hopefully biosecurity measures can keep that out. It’d certainly make it easier (for the potato industry) down the track.”

Acknowledgement: reproduced with the permission of AUSVEG