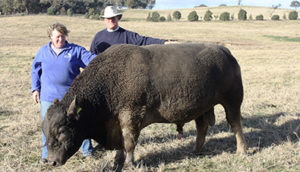 Decades of experience working for the NSW Department of Primary Industries (DPI) taught Dr Hoare to carefully plan for potential risks such as strangles, herpes viral abortion and resistant parasites at his equestrian centre.

“Any biosecurity plan has to start with a very clear property plan – it’s difficult trying to modify it later,” Dr Hoare said.

“One of the main things about our biosecurity strategy is that we have double fencing.”

He lists three important advantages to putting in double fences and tree lines, in addition to their aesthetic value:

With some 20 horses living on the property, and the horses of riding students moving on and off regularly, biosecurity is of fundamental importance to Cadfor’s everyday operations.

“All of our isolation stables and paddocks have been designed so that when people come and park, their animals are a double-fence away from any other horse around and are separated from our cattle yards,” Dr Hoare said.

He also planned for cattle disease risks such as bovine Johne’s disease, which could be potentially contracted from neighbouring properties or if cattle were taken to shows.

Cadfor’s stud breeding herd is protected by minimising the number of introduced animals and careful selection of purchased stock.

“We prefer to buy from a single farm or auction rather than a multi-vendor situation,” Dr Hoare said.

“I’ve never had anything untoward turn up from one of those, but you understand that it could, so where you have a single vendor sale you’re less likely to buy an animal that has been exposed to a whole lot of other animals in the near past.”

Dr Hoare boasts an impressive CV from his days before ‘retiring’ to full-time farming a decade ago. As the NSW State Equine Veterinary Officer, he was responsible for managing quarantine for the equestrian events at the 2000 Sydney Olympics and worked as the Industry Liaison Officer during the 2007 equine influenza outbreak.

“We made things easier by having a single veterinary inspection to satisfy all the legal and venue requirements. The horses were also under quarantine for the entire time of competition – they never left the equestrian centre.

“But the people involved – vets, riders, managers and grooms – all had to follow stringent biosecurity procedures, including changes of clothing and boots, and washing their hands.”

During the 2007 EI outbreak, Dr Hoare spent six months in the control room at Orange, where he played a pivotal role in the eventual eradication of the disease.

“Over those six months we sent over a million emails to the owners on the horse industry database,” he said.

“People did their best to follow our biosecurity recommendations. The number one thing was ‘don’t move your horse’. Also – wash your hands and anything the horse has touched. We made the advice simple, so that people would actually implement it.”

“We found that the recommended biosecurity practices could stop the spread from horse to horse and from horse to person to horse, but they couldn’t always stop the disease spreading in the air. Containing EI was the joint success of all the dedicated people from the DPI, the horse owners, the private practitioners, the horse industry and everyone associated with it.”