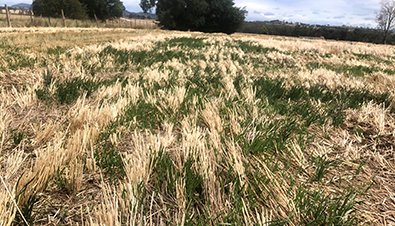 The ‘green bridge’ is any plant material such as crop volunteers and weeds growing out of season that can act as hosts of pests and diseases, allowing them to move from one season’s crop to the next. Image: Steve Simpendorfer, NSW DPI

Preventing the early build-up of pests and diseases, preserving soil moisture and nutrients and reducing the weed seedbank are all good reasons to control the green bridge in between cropping seasons.

Cereal rusts (Puccinia species) can only survive on suitable living host plants, so the presence of a green bridge allows them to survive locally.

Stripe rust can be a serious problem on wheat in regions where cool temperatures prevail through the growing season. Barley and some other grasses and cereals are also affected. It survives on volunteer wheat, barley and triticale, as well as on barley grass and other cereal grasses, brome grass and phalaris. 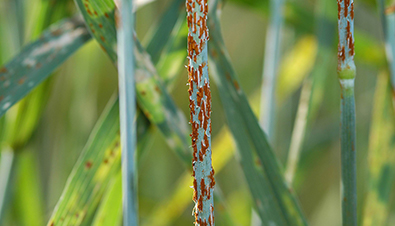 Stem rust most commonly affects wheat, but barley, oats and rye can also be affected. The most important hosts are susceptible wheat volunteers, but it can also survive on barley, triticale and some grasses.

Leaf rust is more widespread, but often less severe than stem or stripe rust. The most common hosts are volunteers of susceptible cereal varieties.

Barley yellow dwarf virus (BYDV) and cereal yellow dwarf virus (CYDV) infect all cereals, having significant effects on wheat, oats and barley. They are transmitted mainly by oat and maize aphids. Grass weeds and volunteer cereals can be hosts for BYDV.

Turnip yellow virus (TuYV, formerly known as beet western yellow virus) and bean leaf roll virus (BLRV) affect oilseed and pulse crops, via aphid vectors. TuYV is endemic in canola crops in south-western Western Australia. BLRV causes severe symptoms in pulses. Hosts for these viruses and their vectors include broadleaf weeds and pasture legumes such as lucerne, medics and clovers. Wild radish is also known to be a host for TuYV.

Invertebrate pests such as aphids, diamondback moth, slugs and snails usually present the greatest risk to crops early in the season. A green bridge can also provide habitat for slugs and snails to survive over summer, and acts as a food source in autumn, reducing the effectiveness of baiting programs.

Soil-borne pathogens and pests that are not highly mobile will generally persist in previously cropped paddocks. Removal of the green bridge and rotation with non-host crops are ways to reduce future pest and disease pressure for crown rot, root lesion nematodes and rhizoctonia.

Monitor germination of weeds and volunteers after rainfall events in the fallow period. Growers should aim to control the green bridge so that no green plant material is present for a minimum of four weeks prior to seeding. For disease management purposes, the time taken for herbicides to achieve complete plant death should be added on to this four-week period, so application may need to be completed up to six weeks prior to seeding.