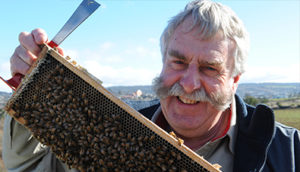 Tasmanian bee keeper Lindsay Bourke was a finalist in the plant category of the 2013 Biosecurity Farmer of the Year Award.

As former Chairman of the Australian Honey Bee Industry Council, Lindsay has worked to improve biosecurity in the Australian beekeeping industry. His motivation, and what keeps him awake at night, is the Asian honey bee and the destructive mites it is capable of carrying.

“At the moment, Australia is still a honey paradise. We are the last country in the world that doesn’t have Varroa destructor,” Lindsay says.

“The honey industry is only worth about $100 million a year, but our bees directly pollinate an estimated $4 billion of crops. Some, like apples, pears, cherries and almonds, would be lost without the bees.”

It’s because of the reliance of so many plant industries on the pollination services of bees that a beekeeper falls into the plant category of the biosecurity award.

Varroa mites, tiny parasites that feed off honey bee larvae, have destroyed the European bee populations of Papua New Guinea and New Zealand. Lindsay has been part of the industry committees that have been looking at what needs to happen if Australia gets the varroa mite.

“No country that has become infected with Varroa destructor has been able to stop its spread,” Lindsay adds.

He was at the fore of the development and publication of a biosecurity plan for the honey bee industry and a biosecurity manual for honeybee producers.

Copies of the manual were sent to 10,000 registered beekeepers in Australia in an effort to get the message about the importance of bee biosecurity to be more widely recognised.

“Although the Asian honey bee is now established in Queensland, other parts of Australia remain free of the pest,” said Mr Bourke.

Lindsay has played a leading role in the national honey bee industry to establish a management plan in an attempt to contain the pest, and prevent its spread to other parts of Australia.

Part of that management plan was a project looking at the remote sensing of bee hives at ports, an early warning system for bees entering Australia via shipping routes.

On a more local level, as President of the Tasmanian Beekeepers Association, Lindsay liaised with the state department to create a new protocol for the importation of queen bees from the Australian mainland into Tasmania.