Hope for the best, but plan for the worst

Hope for the best, but plan for the worst 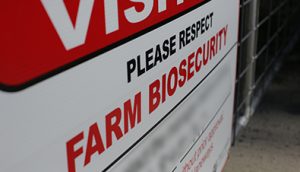 As more and more livestock producers implement a proactive biosecurity strategy for their farms, the big question continues to be how biosecurity fits into producers going about their business and living their lives as normal.

At the same time several state governments, and the Australian Government, have announced or implemented changes to biosecurity and trespass legislation in the wake of a rise in on-farm trespass by animal rights activists.

These changes are designed to provide a deterrent to trespassers by increasing penalties for those who knowingly and willfully enter a farm or property without permission and in ways that can increase the risk to animal health and welfare.

In the May 2019 edition of Farm Biosecurity News, Animal Health Australia (AHA) discussed the risks that people entering your property – both legally and illegally – pose to a property in the form of potential new diseases, pests and weeds.

“Our message to producers at the time was that each visitor needed to be assessed, however briefly, for their biosecurity risk,” said Dr Simon Humphrys, AHA’s Executive Manager for Biosecurity.

“This is certainly still the case and, in some states, your risk assessment and biosecurity management plan may be vital to ensuring those penalties can be enforced.”

Being able to demonstrate your biosecurity requirements puts you in a stronger position to argue that an action has resulted in an unacceptable risk to your business. In most cases, such as dealing with neighbours, contractors or utility companies, you should be able to count on the goodwill of all involved to help manage that risk. This mutual obligation to protecting our environment is the cornerstone of the most recent changes to biosecurity legislation.

“Opponents of this legislation will claim that biosecurity is simply being used as an excuse to deny them entry to the property,” Dr Humphrys explained.

“In the livestock sector we understand that there is no such thing as ‘zero risk’ when it comes to biosecurity. What we need to be clear on is that a disease, pest or weed outbreak can be a disaster – a disease incursion can be ‘game over’ not just for your livelihood, but for the lives of every animal on the property and on surrounding properties.”

A biosecurity management plan is not only a proactive statement of your biosecurity goals, it is a contingency plan which helps ensure you remain resilient in the face of any increasing risks.

“African swine fever is a great case in point – if that does reach Australia, on-farm biosecurity is the moat protecting the castle,” said Dr Humphrys.

Setting out some actions to take when you suspect there’s a risk of an incursion, or when a threat presents itself on-farm, is vital to ensuring you can handle the issue before it grows beyond your control.

“While the legislation is designed to deter trespassers, nothing is foolproof,” Dr Humphrys explained.

“Use what is within your control. You need to be prepared to manage the situation in the event that something – or someone – turns up unexpectedly and in a bad way.”

For more information on managing people movement on-farm, visit the People, Vehicles and Equipment section on the Farm Biosecurity website.