Japanese encephalitis detected across the east coast of Australia

Japanese encephalitis detected across the east coast of Australia

Japanese encephalitis (JE) has  been detected in piggeries across Queensland, New South Wales, Victoria and South Australia. Producers in these regions should be vigilant and stay on the lookout for signs of JE among pigs and horses in particular.

JE is caused by a virus that can cause reproductive losses and encephalitis in susceptible species. The virus is primarily spread by mosquitoes in mostly pigs and horses but can also spread to humans (a zoonosis). While reports of the virus in other species are rare, JE has previously been detected in a wide range of other animal species, including waterbirds, donkeys, cattle, sheep, goats, chickens, ducks, and dogs.

Animals and people become infected through the bite of infected mosquitoes. Fortunately, severe illness arising from JE infection in humans is rare and most people will have no symptoms at all if infected, however the virus can be fatal in very rare circumstances.

It’s important to note that JE is not a food safety concern. Commercially produced pork meat or pork products are safe to consume during this outbreak. At this stage, it isn’t known how the virus has come into Australia and the movement of infected mosquitoes or migratory waterbirds may have played a part in the spread of the virus. Controlling mosquito populations for you and your piggery 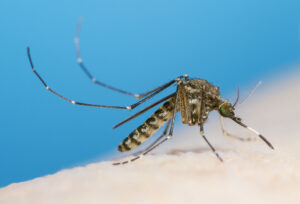 Controlling mosquito populations around your farm is the crucial to preventing the spread of JE and other diseases for you and your piggery.

There are simple steps humans can take to avoid our exposure to infected mosquitoes and these are:

For animals however, a combination of environmental and chemical control is the most effective way to control mosquitoes:

Chemical control can be applied to water sources, the outside of sheds and buildings, effluent ponds, staff facilities and pigs

Remember to keep records of all pest control activities as part of your biosecurity plan.

What to do if you suspect JE on your property?

JE virus is a nationally notifiable disease, and this means if you suspect an animal is showing signs of the disease, you must report it.  You can do this by contacting your local veterinarian or simply call the national Emergency Animal Disease Watch Hotline on 1800 675 888.

This will put you in touch with your state or territory’s agriculture department.

What response arrangements are in place?

The Australian Government has announced a $69 million commitment to control the spread of the virus.

In conjunction with human health authorities and the pig industry, mosquito trapping and control is being conducted at all JE infected premises.

Mapping of infected piggeries and suspected infected piggeries is being shared across jurisdictions and with state human health authorities. The maps will help identify potential higher risk transmission areas for communities. Locations of feral pigs, waterbirds and major watercourses will be added, along with locations of vector surveillance.

The government is providing $17.5 million to support jurisdictions with mosquito surveillance and control activities.

$10 million will support states and territories develop and implement surveillance for the animals that are affected by this virus so that we can contain infected areas and minimise the risk of disease in humans.

And an additional $4 million will support enhanced surveillance, including advanced modelling and geospatial analysis to determine spread of the virus. That will keep producers, workers and communities that live near piggeries or areas where waterbirds congregate informed about where risk areas are, and what they need to do to protect themselves.