Make sure your next cuppa isn’t a biosecurity risk

Make sure your next cuppa isn’t a biosecurity risk 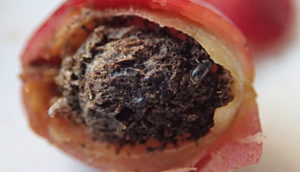 For more than a decade, a small group of farmers have been growing coffee bushes in Far North Queensland and northern New South Wales, and in 2011 the first coffee made from commercially grown Australian beans hit the market.

From these humble beginnings, the industry in Australia is becoming increasingly concerned about biosecurity and the immediate threats to growers from pests and diseases that affect so many other coffee producing nations.

Around 80,000 tonnes of coffee beans are currently imported into Australia annually. But the countries that are supplying Australians with the bulk of their morning cup of coffee have pests and diseases that we don’t want in Australia, in particular the coffee berry borer (Hypothenemus hampei).

Confirmation that coffee borer is in Papua New Guinea means that one of the worst pests of coffee is at our doorstep and could severely impact the fledgling industry in Australia. Coffee grown in tropical Queensland is at risk from the movement of goods from Papua New Guinea southwards that could carry the coffee borer.

The coffee borer’s main host is Coffea arabica – which in Australia is favoured over the C. robusta type of coffee plant – producing Arabica beans for roasting and selling into premium markets.

It’s most important, particularly where tourism and coffee growing occur in the same area, that the right biosecurity procedures are followed to prevent any pests or diseases from becoming established in Australia.

If you are visiting a coffee plantation, make sure you follow any requests relating to biosecurity.

Productions practices on farm are also important. Growers only use certified planting material that they know comes from a local verified source, not overseas (unless it’s been though quarantine). And certainly not green beans imported for roasting.

Although at times it can be tempting, hessian bags that are used when importing coffee beans are not used in orchards, because they could be carrying pests and disease-causing organisms. The only time this might be okay is if they have been sterilised by autoclaving or other means.

Everyone has a role to play in biosecurity. So please, coffee drinkers and gardeners of Australia, do your bit to protect the industry: don’t try to grow green coffee beans.

Give the fledgling Australian coffee industry the best chance to realise its full potential, without major long-term ongoing costs to control the pod borer, or any other exotic pest.