Moving it? Declare it!

Moving it? Declare it! 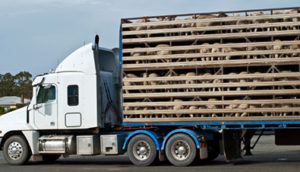 If one thing is clear about travelling in 2020, it’s how important it is to be upfront about where you’ve been and make sure you have the correct paperwork for the journey. During a disease outbreak, knowing where each new case has come from is vitally important to understand how the disease is spreading.

Diseases spread faster and further when an infected animal moves, mixing with other susceptible animals and potentially contaminating yards, buildings and vehicles. Unknowingly introducing an infected animal to your property is the absolute highest risk of your flock or herd contracting a disease they did not previously have, according to Animal Health Australia’s Senior Manager Biosecurity, Dr Rob Barwell.

“As the owner or manager of those animals, it’s up to you to manage the risk of introducing a disease onto your property,” Dr Barwell explained.

“This goes double for endemic conditions – those that are known to occur in Australian livestock – which don’t necessarily face the same scrutiny as a potential emergency disease and likely won’t prompt a government response.”

With WoolProducers Australia encouraging sheep owners to take biosecurity seriously in the face of increased  virulent footrot cases, Dr Barwell is eager to echo the call for all grazing livestock producers to make use of a National Animal Health Declaration whenever livestock are bought and sold – especially with so many producers beginning to restock their properties from further afield than they may typically buy.

Farm Biosecurity has Declarations for cattle, sheep, goats, alpacas and llamas, to help new buyers get a sense of what health conditions they may be bringing on to their property in order to make an informed decision about the purchase.

“A Declaration is really just a simple form which asks the producer selling the livestock to disclose information about diseases or parasites that may be present within the flock or herd and any treatments that have been given,” said Dr Barwell.

“That way, you can take on those animals with increased confidence, knowing their history and how their health has been managed in the past, so there’s less chance for nasty surprises down the line.”

Producers, agents, saleyard operators and processors of cattle, sheep, goats and pigs are also responsible for ensuring that the national livestock traceability database is kept current, by updating them every time animals are bought, sold or moved to a different property (as defined by a Property Identification Code).

“Knowing who has livestock within a state, where those livestock are kept and, most importantly, where livestock have moved helps animal health authorities trace diseases back to their source,” Dr Barwell explained.

“Much like human contact tracing, it’s also important to know where livestock from different properties may have come together, such as on a truck or at a saleyard.”

The same principle applies when talking about other biosecurity risks too, such as insect pests and weed seeds, which can move about on vehicles, farm equipment and even clothing and shoes. Especially with summer harvests well underway, producers should seek assurances that their contractors are bringing clean vehicles, equipment and clothing onto their property.

“I cannot stress enough how important it is to do your due diligence and have the most complete picture of the risks facing your property,” Dr Barwell said.

“Prevention is far easier than treatment, and even endemic diseases, pests and weeds can cost you a small fortune in control costs and lost production.”

Dr Barwell’s take-home message for producers is simple: when buying livestock, ask for the documentation up front.

“This information mostly helps you as the new owner of the livestock in managing the health of the livestock going forward, so it’s up to you to ensure you receive it before the purchase takes place.”

As for producers selling stock, Dr Barwell encourages you to make it as easy as possible on the purchaser by ensuring the health documentation and movement documentation is ready to go.

“Make sure you’ve filled in the Animal Health Declaration to the best of your knowledge, make sure you’ve got everything you need to update the NLIS database, and that the animals are fit-to-load before you put them on the truck.”

Find out more about biosecurity for livestock entering and leaving your property at the Farm Biosecurity Website.