The Potato Growers’ Biosecurity Manual is a guide to farm biosecurity measures to reduce the risk of weeds, pests, and diseases impacting production. It was developed by Plant Health Australia in consultation with AUSVEG and potato growers across NSW, Victoria and South Australia.

The manual is designed to be used by potato growers and their staff, as well as contractors, processors, researchers, and consultants working in the potato industry. It gives specific advice on what potato producers need to be aware of, and what measures they should be taking on their farm to reduce biosecurity risks.

It’s separated into six areas of biosecurity practice that will help potato growers safeguard their farm from biosecurity risks: 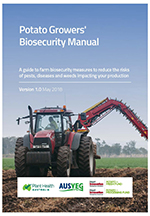 A broad explanation of Australia’s biosecurity system including pre-border, at the border and post-border biosecurity procedures is also provided.

While the Australian Government manages pre-border and at-the-border procedures and regulations, it’s the responsibility of all Australians, including potato growers, to reduce or eliminate the risk of post-border biosecurity threats to their crops.

The manual will be released with the upcoming edition of Potatoes Australia magazine. If you are not signed up to receive Potatoes Australia, you can use the online subscription form or email communications@ausveg.com.au.

If you would like additional copies of the manual, please email madeleine.quirk@ausveg.com.au. An electronic version of the manual will also be available on the PHA website, the Farm Biosecurity website and the AUSVEG website.

Acknowledgement: This post appeared in the AUSVEG Weekly Update published 12 June 2018. You can subscribe to the update using the online form to receive the latest industry news every week.

The project was supported with funding from Hort Innovation using the processing and fresh potato research and development levies and funds from the Australian Government.