The first day of Spring marks a lot of things for farmers, one of them being the beginning of brown marmorated stink bug (BMSB, Halyomorpha halys) risk season, which runs from 1 September 2021 to 30 April 2022, when the pest travels to Australia hitchhiking among imported goods and cargo. If you are planning to import any vehicles, machinery or bulky parts and equipment during this time, there may be import conditions and restrictions to be aware of. The conditions and target risk countries are listed here.

The stinkbug is ranked the nineth highest risk National Priority Plant Pest for Australia and is a pest of apples and pears, berries, cherries, cotton, dried grapes, hazelnuts, pecans, strawberries, summerfruit, tables grapes, truffles, walnuts, vegetables. Originally from Asia, the pest has spread across the world to the United States and Europe. As temperatures cool in these regions, BMSB seeks shelter from the cold including container vessels at ports waiting to be loaded with cargo destined for markets in Australia.

To prevent this from happening, all vessels that berth, load or transit from target risk countries are subject to offshore treatment before entering the country.

If BMSB were to become established, it would severely impact Australia’s agricultural crops, with environmental concerns that the bugs will also attack Australian natives. 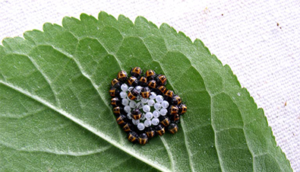 “Preventing it from establishing is a high priority for industry and government alike. Previously, there have been several occasions of BMSB reaching Australian ports with our prevention and surveillance mechanisms working hard to intercept it in vessels, and prevent it from establishing” says Stuart.

“These import measures along with keeping an eye out for anything unusual when you’re importing bulky goods puts us all in the best position to keep this priority pest out of Australia this 2021-22 season.”

There are several similar looking stink bugs in Australia, but it’s easy to distinguish them as BMSB have white bands on their antennae and around the edge of their abdomen. Plant Health Australia has a range of factsheets designed to aid in the identification of this hitchhiker pest as well as a contingency plan detailing hosts, symptoms and management pathways.

The Australia Government has developed a ‘Guide to the identification of brown marmorated stink bug, Halyomorpha halys, and other similar bugs’ which contains images of BMSB at different stages of development and images of other stick bugs that look similar.

If you’re planning to import any parts, equipment or machinery from overseas, visit the Department of Agriculture, Water and Environment to find out the importing requirements.

If you see any unusual stink bugs, or ones that behave a bit differently, make sure you report them to the Exotic Plant Pest Hotline 1800 084 881.