No flies on finalist for biosecurity award

No flies on finalist for biosecurity award 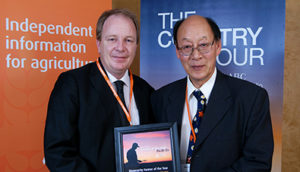 The company has recently expanded its operations from northern Tasmania onto the mainland. Come summer white fields of daisies will be a common sight around Ballarat, Victoria, with combine harvesters reaping the growing number of fields of flowers in the district.

Mr Casey works for Botanical Resources Australia (BRA), a major player in contracting pyrethrum growers in Tasmania, providing agronomic and other crop advice to growers as well as harvesting, transport and storage logistics.

BRA has recently expanded its operations from northern Tasmania onto the mainland. Come summer, the white fields of daisies, so familiar in Tasmania, will be a common sight around Ballarat, Victoria, with combine harvesters reaping the growing number of fields of flowers in the district.

The waters of Bass Strait, summer fire restrictions and flood weren’t the only barriers to be overcome. Stringent biosecurity standards had to be met to allow plant material for processing and machinery back into Tasmania.

With markets across the US, the European Union, Asia and the Middle East, BRA provides more than 60 per cent of the world’s annual supply of pyrethrum, so there’s a lot at stake.

Mr Casey says the key factor to successful adoption of quarantine procedures as well as other aspects of good management is well planned and continuous communication between the project managers, BRA staff, pyrethrum growers and harvesting contractors.

“Aspects of biosecurity are always an agenda item at the annual review and planning meeting between BRA and our contracted harvesters and have been accepted as just another item of general business,” he said.

“We also have a strong working relationship with Quarantine Tasmania and Biosecurity Tasmania staff for all aspects of our biosecurity and quarantine activities.”

Pyrethrum is by far the most commonly sold and most effective ‘natural’ insecticide in the world and is produced by the plant Tanacetum cinerariifolium.

Pyrethrum insecticide is effective against a very broad range of insects, including public health insects (such as mosquitoes, flies and cockroaches), agricultural insects (such as aphids, caterpillars and stored grain insects) and others such as lice and ticks. It is even used to manage head lice in children and bed bugs.

Another reason for its popularity as an insecticide is that it breaks down quickly, especially in sunlight, so it does not persist in the environment.

BRA understands the biosecurity requirements for the importation of a large quantity of plant material from Ballarat to Tasmania and considerable work was conducted to prepare a comprehensive risk assessment for approval by Biosecurity Tasmania.

Mr Casey treats biosecurity as a means of reducing the risks of increased production costs.

He encourages biosecurity measures to be considered as a part of the normal cost of production and to be embraced by all levels of an organisation, from individual farmers to industry and government.

Judges for the award praised Mr Casey’s work for recognising the importance of biosecurity, both for BRA farming activities as well as for the future growth and prosperity of the pyrethrum industry. The judges were impressed by the clear passion that he has for maintaining the future of a small and tight-knit industry by implementing biosecurity measures.

“Nobody wants to be the known as the one who introduced a weed or disease into Tasmania from the mainland,” he said.