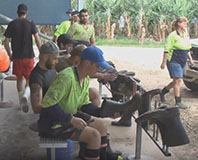 A video has been produced that shows growers how to manage footwear to prevent a fungal disease from devastating their banana crops.

The fungal pathogen the growers are trying to keep at bay is Panama disease tropical race 4. But it’s not just banana growers who can benefit from watching the video. The methods shown can prevent diseases caused by all bacteria and fungi that can survive in soil and water.

When the disease was first detected in Queensland early in 2015, it was decided that it was not feasible to eradicate it. Efforts turned to trying to contain it to a single property. Since then, life has definitely changed for the town of Tully, with biosecurity signs and footbaths becoming common sights. 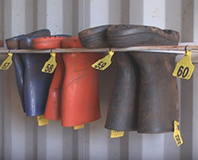 The fungus that causes this kind disease is carried by soil and water, so it is particularly important to keep footwear clean to prevent a property from becoming contaminated.

Simply walking through the plantation with dirty boots would be enough to contaminate the property. And once contaminated, spores can remain alive in the soil for more than 30 years.

The video shows the solutions that three producers have come up with to manage the biosecurity risks associated with living in an area where there is a property that is known to be infested. The growers are using a zone system, separating the packaging and production areas of the property, with footbaths located at checkpoints. Dedicated footwear that is cleaned before moving into another zone is also provided. Being far north Queensland, banana growers also have to contend with the weather. The combination of high rainfall, the occasional cyclone, intensive packaging operations and people movement on farm during planting and harvest all create challenges in managing people movement and footwear hygiene. The growers are using sheds or old containers to house their footbath stations, providing benches for people to change footwear, somewhere to hang other work gear, and shelter to prevent the disinfectant solutions from being diluted or inactivated by the elements.

No two farms are the same, so the growers have had to create a system that works for them. Other key points about effective footbaths are also provided in the video.

All growers can benefit from the methods now being used by these banana growers to secure their farms and their futures.