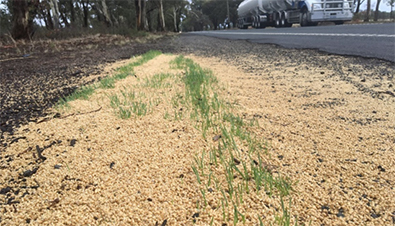 Dumping of grain on roadside stops like this is illegal, and is a serious biosecurity risk

If you’re one of the thousands of highway drivers who use roadside rest stops you may well have seen piles of grain on the ground, left behind from trucks that are either cleaning out trailers or reducing weight.

What you might not realise is that not only is the dumping of grain illegal, it is also a serious biosecurity risk.

“Dumped grain can be a food source for birds and vermin such as mice and wild pigs which build in number and infest and damage nearby crops and grain storages. Vermin can also carry seed to other areas where it becomes a weed or vector for pests and diseases.”

As the grain germinates it provides an ideal green bridge for the early build-up of fungal diseases such as rusts, which cause substantial yield loss to grain growers.

“These illegal grain dumps are often found along transport corridors to and from ports. They provide an ideal pathway for hitch hiker pests to make their way from an urban port to a farm, where they can become established in the grain production system.” As the grain germinates it provides an ideal green bridge for the early build-up of fungal diseases such as rusts.

A question to be asked is why would you dump grain on the side of a road?

“Some transporters are concerned about having excess weight and compliance with the Heavy Vehicle National Law, which is considered a breach of their chain of responsibility (COR).”

Grain is also dumped in smaller quantities at roadsides by drivers who have delivered to sea ports or other grain receival sites and are unable to find facilities to sweep out trucks and trailers (a requirement under the Transport Code of Practice), before backloading with fertiliser or other commodities from a different facility.

Mr Moran urges people to undertake some simple actions and reduce the risks of grain being dumped on the roadside.

“To avoid overloading a more accurate measure of weight is required. This could include installing a permanent or temporary on-farm weighbridge, gaining access to a nearby off-site weighbridge, using an on-board, over the axles or suspension-mounted vehicle scale, or simple visual methods proven to reduce overloading.”

The National Heavy Vehicle Regulator (NHVR) states that; under COR, complying with transport law is a shared responsibility and all parties in the road transport supply chain are responsible for preventing breaches. That means anybody, not just the driver.

“While this is an ongoing matter between the grains industry and receival sites, if there is grain left over that needs to be disposed of, do so safely. It can be burned, buried or bagged and reused, perhaps as livestock feed if it is uncontaminated,” Mr Moran said. 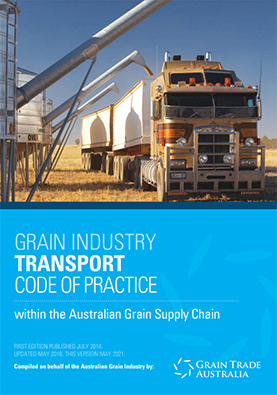 The grain’s industry, through the 2021 Grain Trade Australia (GTA) Transport Code of Practice supports this practice through recommended biosecurity protocols.

Mr Moran said there should be no residual grain left in the trailer that needs to be dumped prior to picking up a new delivery.

“If a truck arrives empty but not clean, it’s possible that residual grain has been dumped.”

He suggests asking your grain freighters if they comply with the Grain Trade Australia Code of Practice.

“Growers should also have a designated clean-down area which can be monitored regularly for volunteer plants, weeds or pests.”

“If you witness roadside grain dumping, you should report it to the Environment Protection Authority using their reporting App. It’s considered littering under the Victorian Environment Protection Act (1970), so if you see someone dumping grain (or anything) from a truck and trailer, provide relevant details and it will be followed up.”

If you suspect a chemical is dumped with the grain, let Agriculture Victoria’s Chemical Standards Branch know (call 136 186), so that appropriate action can be taken under Agricultural and Veterinary Chemicals (Control of Use) Act (1992).

You may also want to inform the transport company and/or the farmer who they are carting for (if known). After all, it’s also dumping a farmer’s hard-earned income on the ground.

Incidents can also be discussed with your state Grains Farm Biosecurity Officer, who can have the matter further investigated, cleaned-up or referred, depending on the circumstances.

Biosecurity is maintained if everyone along the grain supply chain follows the chain of responsibility and excellent hygiene practices. For further information on grain biosecurity including free booklets and gate signs, please contact Jim Moran at Jim.Moran@agriculture.vic.gov.au

More information on the Grain Trade Australia Code of Practice can be found at graintrade.org.au/grain-industry-codes