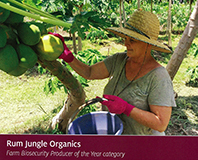 Last month, we announced the winners of Farm Biosecurity Producer of the Year Award, which are part of the Australian Biosecurity Awards.

In the next two issues of Farm Biosecurity News, we will be profiling the winners and filling in some of the details.

The first profile is of Alan Petersen and Julie-Ann Murphy from Rum Jungle Organics, a 26 hectare property that they’ve run since 1999 in the Northern Territory, the principle crop being bananas.

While they are small players in the industry, their biosecurity practices can be a shining light for others to follow.

“At the awards, we were pretty proud to represent the NT, organic farming and the little guy. It’s always good to be recognised for your efforts,” said Julie Ann.

In 2013 when banana freckle was found on the property, all banana trees had to be destroyed and disposed of as part of the National Banana Freckle Eradication Program, resulting in virtually no farm income for the past four years.

Their experience of being caught up in the banana freckle eradication effort has been devastating and led to a thorough reassessment of their biosecurity measures and their personal motivation to stay in the business.

There were times when they wondered whether they should call it quits. But they have replanted a new crop of bananas, the trees are producing fruit and they have again started selling top quality fruit at the local markets.

With the worst now behind them, Alan and Julie-Ann are able to reflect on their experience and are optimistic about their future. They want to ensure they protect their investment from pests and diseases that could again impact their livelihood. “We put a lot of effort into research and updating, finding out what was best practice for us as organic producers. To have that recognised as exemplary was pretty good feeling for us,” said Julie Ann.

The plan developed by Alan and Julie-Ann is arranged around the biosecurity ‘essentials’, allowing them to identify all potential risks and ensuring nothing is being overlooked. Their plan is influenced by their desire to grow products organically, and by their first-hand experience from being part of an incursion response.

“The plan is treated as a living document, to evolve and keep it going for the future being reviewed and updated if and when needed,” said Alan.

While they are not a large enterprise, the biosecurity measures they are using are appropriate to the size of their business and their budget.

“We’ve got financial restraints, especially after our very low income for a few years. But we’re hoping that in the future we can tighten our plan and make it even better, and act on the things we’ve got in the plan,” said Alan.

Rum Jungle Organics deserve an award because they have gone to great lengths to ensure their property is kept as safe as possible in terms of biosecurity. They understand that no plan can fully eliminate potential pests and diseases, but strictly adhering to the measures they have in place on their property reduces the risks.

It’s their willingness and ability to make simple changes to improve their biosecurity on-farm, when it suits their budget, that sets them apart.

While their farm operation is not large in terms of food production, Alan and Julie-Ann understand that such a small investment to ensure they have best management practices to minimise pest and disease risks goes towards protecting their livelihood, the broader industry and enhances the reputation of the Territory and Australia as a producer of fresh, high quality produce that is in demand.