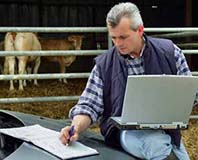 It’s been a while since the introduction of the Johne’s Beef Assurance Score (J-BAS) and the addition of biosecurity and animal welfare requirements to the Livestock Production Assurance program (LPA) in October last year.

With on-farm biosecurity for livestock producers being in the spotlight, Farm Biosecurity commissioned some research to look at the progress producers in the combined grains–livestock sector were making in developing their biosecurity plans in the last 12 months, presumably to comply with J-BAS and/or LPA requirements.

Stuart Kearns, Manager of Farm Biosecurity Programs at Plant Health Australia, said that there were a few surprises in the results.

“The good news is that just over 30 per cent of producers surveyed had made or updated a biosecurity plan to implement certain measures on-farm that would reduce their biosecurity risks,” Stuart said.

This result varied a bit from state to state, with Queensland and NSW grains-livestock producers being well above other states – with a combined average of just over 60 per cent – and most likely to have a biosecurity plan.

The other good news is that when the group of producers who had created a plan were asked if it included practices within their grains enterprise, over half said that it did.

“That’s going the extra mile and good to see the recognition of how important biosecurity is on farm, not just to get a J-BAS score or to comply with LPA.”

“It also looks like people are implementing more of the actions in their plan.”

The increase in the number of producers implementing measures like checking the health and history of new animals, restricting unnecessary access to the farm, monitoring the health of both crops and livestock, and controlling visitor movement on the property was impressive.

“If left unmanaged, these things pose some of the biggest biosecurity risks to a property but there are relatively easy changes you can make.” Stuart said.

In an ideal world, more farmers would have a biosecurity plan to implement the practices that reduce the critical risk to their specific farms.

In reality, each and every action you take is a another step in minimising the costly impacts of new pests and diseases. No single action is the difference between a successful or unsuccessful biosecurity plan. No single action will provide you with 100 per cent security.

“What is important is to go back over your plan from time to time, check on your progress and update your plans for further implementation. You’ll see what’s working and where things could be improved.”

That means if you need to ramp up certain areas in response to a particular pest or disease threat, you’ve already got some measures in place and you’re less vulnerable than someone who hasn’t made any changes to improve biosecurity on their property.

“On behalf of both Plant Health Australia and Animal Health Australia, I would like to thank all the producers who participated in the survey: we appreciate the time that you gave to answer these important questions,” Stuart said.