The 2019 Farm Biosecurity Producers of the Year

The 2019 Farm Biosecurity Producers of the Year Melinee was nominated for her on-farm management practices, which are routinely on display when hosting industry leaders and up-and-comers for farm tours and workshops.

“Melinee and her husband Rob have been at the forefront of the biosecurity conversation in the cattle industry for many years,” said AHA’s CEO, Kathleen Plowman.

“Their on-farm practices speak for themselves, and their willingness to open their property and share insights with both Australian farmers and international guests reflects their drive to make a real difference. This is what has made them leaders in the industry.”

Luciano was nominated for his preventative approach to disease and pest management, as well as his active participation in surveillance and his willingness to host biosecurity workshops on-farm and share his knowledge with the industry.

“Luciano has shown not only his commitment to on-farm biosecurity, but also a firm understanding of its importance to the wider industry,” said PHA’s Executive Director and CEO, Greg Fraser.

“He plays an active role in encouraging others to take proactive steps to secure their farms, made all the more effective by his enthusiasm for demonstrating his own on-farm practices.”

Both Ms Plowman and Mr Fraser agreed that both winners deserved to be recognised for their outstanding contributions in encouraging uptake of on-farm biosecurity practices.

“Producers play a vital role in biosecurity, not just for themselves but for the industry as a whole,” Ms Plowman said.

“The more we do to highlight and show what best-practice looks like and provide help to implement these practices, the better. But for this, we need leaders to step up and share their insights,” said Mr Fraser.

Both Melinee and Luciano were presented with their awards during the ABARES Outlook Conference dinner in Canberra in early March 2019. 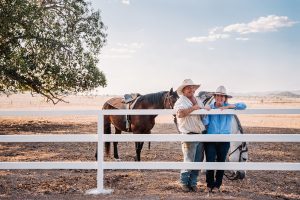 Cattle producer Melinee Leather is a strong advocate for the importance of biosecurity practices to the long-term viability of individual business and the beef industry as a whole.

Melinee, and her husband Rob, are leaders in applying sound on-farm biosecurity and animal welfare practices on their properties and sharing their knowledge with others.

Melinee is the chair of the farming systems committee for the National Farmers Federation and a member of the sustainability steering group for the Red Meat Advisory Council. She has served as the chair of the Cattle Council of Australia’s animal health, welfare and biosecurity committee, an inaugural director of Livestock Biosecurity Network Pty Ltd, vice president and cattle board director of AgForce, and a councillor of the Road Freight Industry Council. He places high value on the economic, environmental and social returns from adopting a preventative approach, and maintains and exceptional standard for the strawberry industry.

He is a committee member of the Victorian Strawberry Growers Association and one of the two Victorian representatives on the board of peak industry body Strawberries Australia. Luciano’s biosecurity advocacy and leadership are highly valued by the industry.