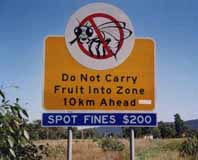 Over two days, a total of 78 written cautions were issued by PIRSA staff after inspecting 500 vehicles

Biosecurity officers in South Australia recently set up a random road block near Blanchetown, to stop and inspect vehicles for fruit and vegetables which can carry fruit fly.

Over two days, a total of 78 written cautions were issued by PIRSA staff after inspecting 500 vehicles.

Rod Turner, General Manager for Risk Management at Plant Health Australia and chair of the Subcommittee on Domestic Quarantine and Market Access, said that the result was disappointing and somewhat alarming that some people are still not complying with the rules in relation to the movement of goods within and between states to limit the spread of regionalised plant pests.

“Fruit fly is just one of the 81 regionalised plant pests in Australia that we really don’t want to allow to spread to other parts of the country. Together, these pests affect many fruit, vegetables and grains grown by Australian producers, and are a real threat,” said Rod.

While a lot of emphasis is placed on the perils of exotic pests entering the country, there are a range of pests and diseases that are already here, and need to be contained to limit their impact on growers across the country.*

“With so many serious pests already in the country, there’s a pretty good chance that there’s one that affects the crops you grow,” said Rod.

An example of disease that was, until 2016, limited to one state is Panama disease tropical race 4 of bananas. The strain of the fungus now confirmed on two banana growing properties in Queensland is the same as the one in the Northern Territory.

“Tomato potato psyllid is another pest that is now settling in around Perth and surrounding growing areas. Veggie growers in other parts of the country really should be thinking seriously about ramping up biosecurity measures to protect themselves in case it finds its way out of that area.”

“We have rules about the movement of plants, plant products, vehicles and soil from one state to another for a good reason. But producers can protect themselves and their livelihoods by using some simple biosecurity measures on-farm too,” said Rod.

“People, for example, are allowed to move freely around the country, and they can unintentionally carry pests and diseases. So it makes sense to try and control their movement onto and around your property, particularly if you think they may have recently been in another growing area.”

“For many growers this is worth doing because they have a competitive market advantage over other growers in Australia simply because they are free from some pests or diseases,” said Rod.

“If you want to hold on to that market, or even access new ones, on-farm biosecurity measures can help you do that.”

“It might seem like a lot of effort to implement biosecurity measures before there’s a problem, but prevention really is better than the extra effort and expense of dealing with it later,” advised Rod.

More information about the major established pests and the other regionalised pests is available from the Australian Interstate Quarantine website, interstatequarantine.org.au