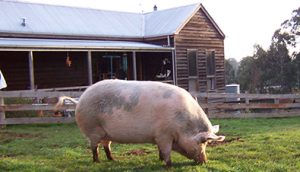 Whether you own one pig or a whole shed-load, you have a role to play in protecting Australia’s pig herd and pork industry from deadly exotic diseases. African swine fever (ASF) continues to move through south-east Asia and Animal Health Australia (AHA) is imploring all pig owners to take biosecurity seriously.

With close to 100 percent mortality rate for pigs and no vaccine available, ASF is the current most pressing disease threat to the Australian livestock sector, according to AHA’s Senior Manager for Biosecurity, Dr Rob Barwell.

“There’s no two ways about it, ASF is an absolute killer,” Dr Barwell explained.

“It can spread through direct contact between infected animals, on people’s clothing and equipment, and in infected feed and water. The virus can also survive extreme temperatures and persist in meat products, including those that have been cooked, for months at a time.”

Since arriving in China, where it’s now considered endemic, ASF has spread throughout south-east Asia, with the Philippines and South Korea being the latest countries to announce an outbreak.

“South-east Asia is a global hub of pork production. Unfortunately for Australia, it’s also a region where we frequently conduct trade and travel to and from,” said Dr Barwell.

“If you have pigs and you’re travelling or hosting visitors who’ve recently been overseas, simple biosecurity measures, such as ensuring they are wearing clean clothing and footwear, can help to mitigate the risk of the virus catching a free ride straight onto your property.”

“This is especially important for friends, family, staff and guests who have had any contact with pigs recently, in Australia or overseas.”

Australia also has a blanket ban on feeding meat, anything that has come into contact with meat and other animal products to pigs. Known as swill feeding, this dangerous practice is thought to have been responsible for an outbreak of foot-and-mouth disease (FMD) in the UK in 2001.

“While we don’t import pork or pork products from known ASF- or FMD-infected countries, there’s always a risk that something is imported before a detection is made, or it crosses the border illegally, whether that be deliberately smuggled in or arriving as an innocent mistake in someone’s luggage,” Dr Barwell explained.

Always buy a commercial stock feed, do not include food scraps in pig feed, and never accept a shipment or gift of meat you suspect has been brought in illegally – the risk is simply too great.

“If a friend or family member has anything to do with pigs whatsoever, please spread the word.”

“Given how infectious and fatal this disease is for pigs, our best hope is ensuring it stays out of Australia. Failing that, swift detection and a rapid response will be essential.”

Learn more about on-farm biosecurity for pigs on the Farm Biosecurity website.

Follow the ASF situation via the World Organisation for Animal Health