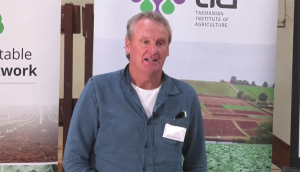 Darryl Smith is a third-generation potato grower (and sheep producer), who grows about 64 hectares of potatoes a year, at Busselton, 200km south of Perth in Western Australia. His ‘self confessed’ claim to fame is that he was the first potato grower in Australia to have tomato potato psyllid (TPP) detected on his property.

Darryl was a speaker at a field day held at the Tasmanian Institute of Agriculture’s Vegetable Research Facility at Forthside in north west Tasmania in October. He spoke about the finding of the tomato potato psyllid on his property, the impact that it had on him and his finances for a year, and what he has learnt about biosecurity.

TPP was first found in a backyard garden in Perth in about February 2017. As soon as it was found in Perth, a major concern of the Department of Agriculture in WA was that it could be in the seed potato growing areas in the state.

Biosecurity officers concentrated on people who had seed potato crops. Darryl Smith was one of them. Officers collected the yellow sticky traps they had set in the field after two weeks, and returned a week later with the news.

“I knew I was in a bit of trouble, because they parked the cars at the front gate. They didn’t even come onto the farm,” said Darryl.

“It was pretty stressful. We’d delivered potatoes the very day before, they’d gone off to the market. We also had bookings and potatoes ready to deliver the next week.”

But that changed with a quarantine notice: nothing could be moved off the farm.

Over the next three days the crops and the boundaries were sprayed. Ten days later there was more spraying.

“At this stage they were still hoping to eradicate the pest from WA. Basically, my potato crop got nuked, there was nothing alive out there, bar the potatoes, after two or three programs of spraying.”

“I’d had a month of nothing delivered, and it was March, which in Western Australia is pretty warm. You can imagine potatoes for a fresh market can deteriorate pretty quickly … In the end they were almost unsellable.”

Only one of his four farms was quarantined, but he was unable to move anything off the property including the seed potatoes that he had brought in to plant the next crop.

“It was quite disruptive, this whole thing.”

TPP doesn’t damage a potato plant that much. It’s more detrimental to other crops: tamarillo, capsicum, other solanaceous crops. But it can carry the CLso bacteria (Candidatus Liberibacter solanacearum, which has not been detected in Australia) that causes zebra chip in processing potatoes.

“That’s what everybody was more worried about,” said Darryl.

Basically, the border between Western Australia and the rest of Australia was shut for anything that could possibly transport this psyllid … like capsicums, strawberries, even lettuce. For a period of about two weeks, the border was shut to just about any vegetable.”

“Eventually they adopted a procedure whereby they could send these things across, with a bit of washing, a bit of work. So now the border is open except for potatoes because they are still worried about the CLso getting out of Western Australia*.”

“This is all pretty horrible. It was a pretty rough couple of weeks, but after it had finished, because WA [and AUSVEG] had signed up to the emergency plant pest response deed, I got reimbursed [by WA] for the total cost of the spraying, about $6000, the 180 tonne of potatoes plus the 60 that I couldn’t get in again. Some of them I managed to sell: I was reimbursed for the ones I couldn’t sell.”

“I was the first one, but there were three or four others detected in the same area as well, and each one of those growers had a quarantine notice on them.”

“We run a cattle and sheep enterprise as well. 15 years ago we got [virulent] footrot. Another thing they control in Western Australia … In the end the only way we could get rid of it was to sell all the stock on the farm, leave the place barren for a couple of months and restock. Again, it’s expensive: another $15000 down the drain just replacing stock.”

“We now ring the department before we purchase sheep, to see if there is any history at all of footrot in those animals. Because of that, we’ve had no reoccurrences in the last 15 years.”

“So you can protect yourself a little bit. You need to, because while there are quarantine officers at every airport and at the ports, on your own farm the person who is responsible for looking after your biosecurity is you.”

“I know that I can actually save myself a great deal of expense.”

“I’ve been farming for thirty years, but 18 months ago I had big signs made up. They are on my gates, and they say that if you want to come on this place give me a ring, but don’t go through the gate until you do.”

Darryl’s advice is that if you are going bring something onto your farm, make sure you know where it has come from and you know that it’s safe.

“When I buy stuff now, I’ll make sure it’s coming from a reputable place. It [problems] can still happen, but at least you are giving yourself a chance, because you’re the one that’s going to get hurt.”

*CLso has not been detected in Australia