Winners of the 2020 Farm Biosecurity Producer of the Year Award

Winners of the 2020 Farm Biosecurity Producer of the Year Award

The winners of the 2020 Farm Biosecurity Producer of the Year Award, a category of the Australian Biosecurity Awards, were announced at the ABARES Conference dinner on 3 March. 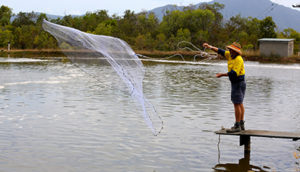 Seafarms Group has made significant and sustained investments in all aspects of biosecurity in its east coast operations. This has seen the company become an industry leader in biosecurity preparedness and prevention.

The company has supported improvements in the understanding and management of significant aquatic pests in Australia.

As the nation’s largest producer of farmed prawns, its approach has helped address many of the challenges associated with managing biosecurity in aquatic environments.

In all of its farm operations, Seafarms Group has actively developed a culture of biosecurity responsibility. Under its operational biosecurity plan, biosecurity controls are in place for all farm inputs, including stock, people, water, environment, feed and equipment.

All staff are trained in biosecurity and Seafarms Group has strict controls in place from the moment anyone enters a company site.

The company also conducts a number of activities not directly required to meet its on-farm biosecurity obligations, but that build capability of the industry to better manage biosecurity risks.

This includes the development of an on-farm laboratory to enable fast turnaround of microbiological pathogen surveillance. It also collects farm-generated data to support evidence-based decision-making for optimised stocking and production.

The company has supported and collaborated with various researchers on projects to support the Australian prawn farming industry and other stakeholders to improve farm biosecurity. 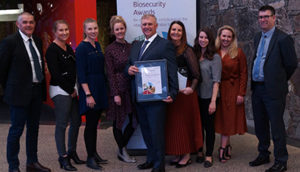 The Templeton family has been growing ginger since the 1940s and Templeton Ginger is now Australia’s largest ginger producer.

Given its long history, the company has experienced how detrimental pest and disease outbreaks can be for small businesses. Templeton Ginger is also aware of the importance of stringent on-farm biosecurity measures and plans.

Current directors John, Shane and Kylie Templeton have a strong focus on implementing biosecurity practices to ensure the longevity, economic viability and integrity of their business and the industry as a whole.

The company has an end-to-end biosecurity approach that helps manage biosecurity risks from purchasing farm inputs, through to processing and packaging of goods.

All farm inputs are assessed for biosecurity risks before purchase and delivery. Strict biosecurity measures are also in place on the farm for the entry and movement of people, vehicles and equipment, as well as packaging, processing and storage of goods.

John, Shane and Kylie have implemented innovative production practices, such as a rotational cropping system. This involves rotating paddocks through different crops, spelling and grazing cattle to minimise the incidence of pests, weeds and diseases.

The farm also has safeguards in place to manage risks associated with feral animals and weeds, including regular monitoring, spot spraying and hand picking.

By leading the way in biosecurity practices, Templeton Ginger plays a significant role in maintaining the production and integrity of the Australian ginger industry.

Templeton Farming Enterprises was nominated by Laura Skipworth on behalf of AgriFutures Australia.