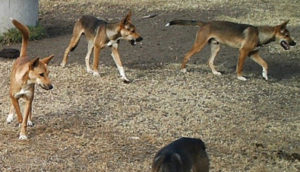 The relationship between people and dogs has benefitted both for generations, so much so that the farmer and their dog is an iconic image in our industry. Yet wild dogs can be one of the biggest killers for affected farmers; not only do they directly prey on livestock, their simple presence can cause a big biosecurity headache.

“Dogs are one of the few animals on the Australian mainland which can pose a threat to livestock, and are found just about everywhere,” Dr Barwell pointed out.

It’s not just wild dogs attacking livestock either; even domestic dogs which are allowed to wander freely can pose a threat to on-farm and regional biosecurity.

“Dogs can be carriers for a range of diseases, parasites and occasionally weed seeds, meaning their free-roaming can spread issues from property to property,” Dr Barwell explained.

“This poses a significant threat to animal health, and given they often interact with domestic dogs, human health as well.”

Aside from the direct impacts of having wild dogs on the property, all feral animals can also open the gate, so to speak, to bigger problems if left unattended. Feral animals may wreak havoc on farm infrastructure, damage fences and foul water and feed sources.

“There are a number of simple actions you can take on-farm to limit the impact wild dogs and other feral animals may have,” said Dr Barwell.

“Things like ensuring fences are maintained, that carcasses are disposed of correctly, bringing on some guardian animals, and lethal control tools where appropriate these can help to minimise the risks.”

Dr Barwell was also keen to point out that working together was a key part of tackling the wild dog issue.

“If one property implements control measures, it’s likely to shift the problem to neighbouring properties. But if everyone in a region works together, the odds of success are much greater.

“Things like baiting and trapping programs must be implemented across a large region if they are to be effective, because dogs can move far and fast. Other actions, like exclusion fencing, might be too costly for an individual producer to carry out, but becomes much more manageable in a group.”

For more information, including details of the National Wild Dog Action Plan, check out the Feral Animals section of the Farm Biosecurity website.