You can’t wash your hands of your biosecurity practices

You can’t wash your hands of your biosecurity practices 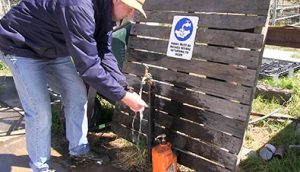 Livestock producers can often see biosecurity as something that happens in a particular moment in time, such as when new livestock enter the property, when livestock leave for or return from agistment, or when an animal begins showing signs of a disease or pest problem.

What often gets lost in translation, according to Dr Simon Humphrys, Animal Health Australia’s Executive Manager for Biosecurity and Product Integrity, is the awareness that everyday farm management practices are playing an important role in minimising the spread of diseases, pests or weeds, regardless of whether you realise it.

“Biosecurity isn’t some far-off thing that only kicks in when you have an outbreak,” said Dr Humphrys.

“In reality, something as simple as washing your hands after handling livestock is a small part of your biosecurity strategy which you are working towards every single day.”

Simple actions, such as checking in on water sources, cleaning out feed storage sheds or maintaining fences goes a long way to ensuring that diseases, pests and weeds are having a minimal impact on the property.

“You’re almost certainly carrying out all or most of these activities on a regular basis, so don’t think of biosecurity as something new you need to do – think of it as part of your farm management plan.”

Keeping up with vaccination schedules and managing waste are just two ways to limit the risk of your animals contracting a disease, while doing the rounds daily or weekly will help you to detect early signs of sick livestock, sprouting weeds, or anything that is unusual about your crops or livestock.

“Finding a biosecurity breach isn’t about waiting for the worst case scenario to rear its head,” Dr Humphrys explained.

“Especially where an endemic condition is concerned an outbreak will likely start small. It’s in your day-to-day activities where you have the chance to pick up on that problem while it’s still possible to manage.

“It’s also entirely possible that your everyday activities will take care of the issue before it’s become big enough to notice.”

“Washing hands, cleaning boots and doing laundry sound so simple they’re almost not worth mentioning, but you’d be surprised the impact a little soapy water has when it comes to preventing diseases, pests and weeds from entering or leaving the property,” Dr Humphrys said.

“If I could impress upon you one simple idea, it would be keep doing what you’re doing, and keep an eye out.”

Those who want to know more about biosecurity as part of your ongoing farm management strategy can check out the Production Practices section of the Farm Biosecurity website.