Congratulations to all of our 2020 Farm Biosecurity Producer of the Year Award winners.

Winners Kia Ora Merino and KW Orchards were announced on 9 November at the Australian Biosecurity Forum, while Seafarms Group and Templeton Ginger received their award in March.

Well done to everyone involved. They are strong advocates for biosecurity and best practice livestock and farm management. This has supported their market access and the quality of their farming environment. Their seamless and strict biosecurity measures are incorporated into everyday farming practices. They developed Ethical, Sustainable, Profitable (ESP) wool production, which combined their BIOCHECK® Biosecurity plan with all farm welfare, quality and management processes, and procedures.

Kia Ora Merino uses a variety of biosecurity systems. The Finnigan family regularly update their biosecurity plan, use strong documentation practices and have high standards for nutrition, cleanliness, health and disease prevention. Kia Ora Merino also uses the AWEX WoolClip app, which is used in conjunction with the addition of QR/RFID tracking on each wool bale. This means tracking is possible from farm to product, adding a new level of biosecurity and provenance to the wool.

Kia Ora Merino does not have footrot, lice or drench resistance. To maintain this status, strict rules are applied, such as: 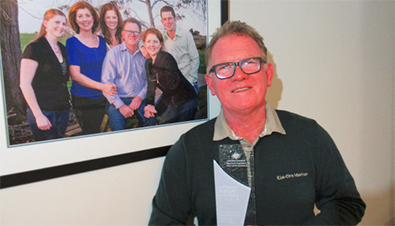 To reduce the risk of introducing new diseases, Kia Ora has a self-replacing flock and uses artificial insemination to purchase outside genetics. The few purchased stock undergo quarantine drenching, inspection, vaccination and other measures before being quarantined in a separate paddock for 21 days.

Equipment is kept on the property to avoid contamination. Visitors must follow biosecurity signage and sign a logbook. Visitor vehicles are directed to specific parking locations and visitors use farm vehicles on the property. New footwear is also provided to shearers to stop the spread of lice between sheds.

Kia Ora Merino has also played a role in influencing and enabling other farmers to take biosecurity measures. The family uses social media and the Kia Ora Merino website to maintain transparency and communicate farm practices to customers and the public. Kia Ora Merino was one of the first farms in the local area to introduce biosecurity signage at all entry points.

Kia Ora Merino has won several awards, including the Premier’s Sustainability Awards 2019 and the Lambition Awards Meat & Livestock Australia Sustainable Producer of the Year 2020. The farm is also accredited under the Fox & Lillie Rural Genesys group for Responsible Wool Standard (RWS). The family also works towards protecting remnant vegetation and is involved in the Australian Platypus Monitoring Network.

The plan is based on farm biosecurity essentials. For example: 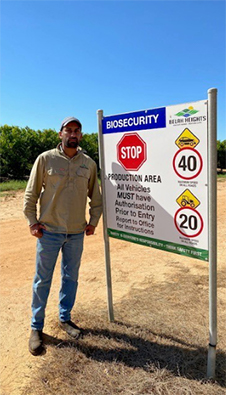 KW Orchards has incorporated the plan into its daily operations. The plan is based on principles of monitoring, reporting anything unusual and using pest-free propagation material. The plan also covers the careful management of people, produce, vehicles and equipment.

The management team – Lynn, Toby and Paul – regularly update their knowledge on national and international industry trends to refine their farming and biosecurity practices. The management team considers biosecurity to be a team effort and they encourage all staff to take ownership of the protocols in place.

Their passion extends to the community, with KW Orchards regularly attending and holding industry events to encourage other producers to adopt farm biosecurity plans. These events give them an opportunity to demonstrate how a strong plan can improve business operations and reduce biosecurity risks. KW Orchards also hosts national and international visitors to demonstrate their commitment to safe, pest-free citrus production.

KW Orchards is a member of Citrus Australia, the Victorian Farmers Federation, Hort Innovation and Sunraysia Citrus Growers, and shares biosecurity experience and current practices freely with members of the groups.

KW Orchards was nominated for the award by Jeff Milne on behalf of Citrus Australia.