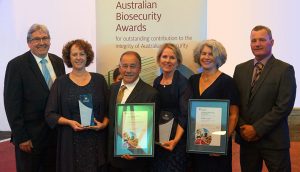 Do you know an Australian biosecurity champion? If someone you know goes the extra mile to protect their property from diseases, pests and weeds, nominate them before Friday 6 December for the 2020 Farm Biosecurity Producer of the Year Award.

Our primary producers are on the front lines of the national biosecurity system. Australia is facing unprecedented disease, pest and weed risks and the everyday actions carried out on-farm are vital to keeping Australia free of exotic threats, minimising the impacts of endemic conditions and maintaining our reputation for clean green agricultural exports.

The Farm Biosecurity Producer of the Year Award was first presented in early 2018 to recognise excellence in on-farm biosecurity practices and the contributions made by producers to the wider biosecurity system.

AHA’s CEO, Kathleen Plowman, is excited to see the Producer of the Year Award return for the third time in 2020.

“Last year we were pleased to announce livestock winners, Queensland cattle producers Melinee and Rob Leather. Their fantastic on-farm measures really set the standard for how biosecurity can be implemented in an extensive grazing operation,” said Ms Plowman.

“With biosecurity being such a hot-button issue in livestock, especially intensive livestock production, at the moment, we have no doubt we will see another round of quality candidates emerge in 2020.”

PHA’s Executive Director and CEO, Greg Fraser, is eager to unearth and acknowledge biosecurity champions who understand the importance of being proactive.

“Our 2019 cropping winners, Victoria’s Luciano and Heather Corallo, are an excellent example of what it means to be a leader in your industry,” said Mr Fraser.

“The way they not only handle biosecurity on their property but the way they put themselves and their practices on display to educate and encourage others is truly commendable.

“I would encourage anyone who has a friend, family member or neighbour who leads by example to nominate them for the Producer of the Year Award.”