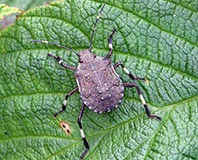 In recent years between September and April, the Australian Government Department of Agriculture and Water Resources has declared ‘stink bug season’ and ramped up treatments and inspections of goods received from the USA, Europe, and Asia to minimise the risk of brown marmorated stink bugs (BMSB; Halyomorpha halys) entering the country via travellers and freight.

Crucially, each year the department detects dozens of brown marmorated stink bugs in imported goods at the ports and treats these consignments before the pests get a chance to be distributed further.

Recently, the NSW Department of Primary Industries has sent out an alert about brown marmorated stink bugs after they were found at a warehouse in Western Sydney inside a container of goods imported from Italy.

Surveillance and fumigation treatment have been undertaken in and around the warehouse. Locals, including school children, have been asked to be on the lookout for possible escapees: so far none have been found away from the warehouse.

Brown marmorated stink bugs are one of the top 40 national priority pests, known to feed on more than 300 plants including fruit, vegetables and ornamentals, and they are far more damaging and difficult to control than other types of stink bugs you may be familiar with.

They’re also known as a nuisance pest, as adults enter vehicles, homes and factories in large numbers in autumn months, looking for places to shelter over winter. In the US they seek shelter from the cold weather of Northern Hemisphere winters in crevices or protected areas such as shipping containers, vehicles, boats, caravans, machinery and personal stored items. And that’s how many of them arrive in Australia.

These stink bugs don’t limit their travel to the usual pathway on fruit or vegetable consignments from overseas. They hitch hike in packing material and personal luggage of passengers arriving from the USA, Europe and Asia in the BMSB season.

Commercial producers and backyard fruit and veggie growers should familiarise themselves with these pests and get into the habit of looking for them. The number of interceptions of stink bugs at the border and their hitchhiking habits mean there’s an increasing risk of incursions. Adult bugs are easy to spot, being about 12 to 17 millimetres long and mottled with a faint reddish tinge. While there are species of stink bugs in Australia that may look similar, adult brown marmorated stink bugs have distinctive black and white banding around the edge of the abdomen with white bands on the last two antennal segments. As you might expect, they can give off an unpleasant odour if they are touched or disturbed. Preferred plants include apples, peaches, raspberries, sweet corn, green beans, capsicums and tomatoes.

With so many alternative pathways to enter Australia it’s important for anyone importing goods or travelling, especially from the US, Europe or Asia, to keep an eye out for the brown marmorated stink bug and report it to the Exotic Plant Pest Hotline 1800 084 881.

If you are in NSW and you think you’ve found a brown marmorated stink bug, take a clear photo and email it with a brief explanation of where you found it and your contact details to biosecurity@dpi.nsw.gov.au

Brown marmorated stink bug (BMSB) interception data for the 2016-17 season is available from the Department of Agriculture and Water Resources web site.