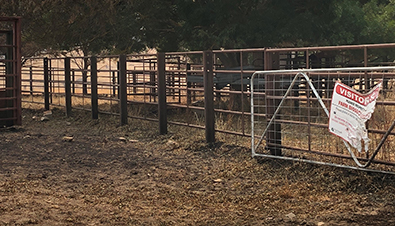 In the aftermath, Agriculture Victoria officers were faced with the difficult task of contacting farmers and land holders affected by fire to assess the damage and their urgent needs for assistance.

Sadly, this included euthanising stock, but it also allowed fodder and personal survival needs to be airlifted in until the roads reopened allowing more adequate supplies to get through.

While much of the cereal, legume and oilseed crop harvest had already been delivered to storage, there was some still stored on farm which was damaged in the fires or inaccessible.

Contacting farming landholders in the fire ravaged areas was challenging because some of the contact details in databases were out-of-date.

Property Identification Codes (PICs) were useful, but there were gaps in the records. PICs are not compulsory for non-livestock producers unless they are growing grapes or potatoes.

However, biosecurity signs which are being used by more and more producers to warn others that the owner is serious about biosecurity were shown to have another use in emergencies.

The signs were in prominent locations and easily seen from the road. It was found that the owners of properties with a biosecurity sign listing phone numbers were easily contacted.

Landlines were often not functional, so mobile phone numbers were used where available or even UHF radio channels – all listed on the biosecurity signs.

Roadblocks meant that many property owners could not get to their property for weeks after the fire, but Agricultural Officers could through special permits and Australian Defence Force escorts.

Agricultural Officers could report damage assessments to farmers who were not present, on holidays, or away for other reasons.

Officers could also ask if the farmer wanted donated fodder, which was sometimes from another state, and had the potential to introduce pests, weeds or disease.