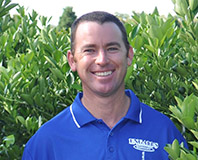 Mark Engall, is the owner and manager of Engall’s Nursery in Dural NSW. Established in 1946, Engall’s is a third generation family run business, specialising in growing fruit trees and roses on 3.6 hectares.

The plants he grows are supplied to commercial growers, independent garden centres, chain stores, wholesale nurseries, landscapers and direct to the public throughout the east coast of Australia, Northern Territory and South Australia.

In early 2014, Mark was contacted by a member of the public seeking his assistance to propagate some budwood of a new variety of citrus. Shortly after, he received a package containing budwood and seed, which he thought had been sourced directly from the United States.

Mark’s quick thinking and referring the material to local biosecurity officers of the NSW Department of Primary Industries averting the possibility of infecting his business, and possibly the entire citrus growing industry, with a new pest or disease.

“Importation of citrus plant material is prohibited without the right certification. It poses a serious risk of introducing a number of exotic plant pests and diseases into Australia,” said Mark.

The appropriate phytosanitary measures and post entry quarantine period need to be used to gain an import permit from the Director of Quarantine.

The matter was referred to the Department of Agriculture for diagnostic testing. A range of invertebrates and microorganisms were found on the plant material, including pests and diseases of biosecurity concern.

“This material had come from the USA which has a very threatening disease called huanglongbing or citrus greening disease. It has nearly wiped out the citrus industry in Florida,” said Mark.

“This disease is not in Australia and all citrus producers and the public must be very vigilant to prevent it arriving.”

If this disease was on the material supplied to Engall’s Nursery, it could not only have destroyed his business, but the whole citrus industry in Australia.

This incident has heightened the awareness of biosecurity risks with Engall’s Nursery. As a result policies, procedures and staff training have been put in place to reduce the risk of it happening again.

Mark starts with only the healthiest propagation material. The nursery is also in the final stages of gaining nursery industry accreditation.

“We are always striving to be the best across all aspects of the business,” said Mark.

He is also a director and vice-president of the Nursery and Garden Industry NSW and ACT.

Mark’s tip to farmers and the Australian public is: “Do not illegally bring plant material into Australia; you could wipe out a whole industry!”