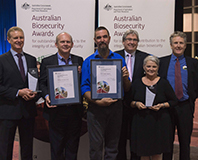 The winners of the inaugural Farm Biosecurity Producer of The Year Award, part of the Australian Biosecurity Awards, are Mackay Farming Group from Tully, Queensland, and Rum Jungle Organics, from Batchelor in the Northern Territory.

The Farm Biosecurity Producer of the Year Award was established by Animal Health Australia, Plant Health Australia and the Department of Agriculture and Water Resources to recognise the contribution of producers who demonstrate outstanding, proactive on-farm biosecurity practices.

“It’s great to see producers who are proactive about biosecurity, using simple yet effective methods to prevent or limit the impact that pests and diseases can have on the health of crops and livestock.”

Plant Health Australia’s Executive Director and CEO, Greg Fraser, added that the award is the only one of its type, recognising the work producers do in safeguarding our country’s excellent biosecurity record.

“These producers found themselves caught up in two separate outbreaks of significant diseases of bananas. They know from first-hand experience what it’s like being involved in an eradication or containment response.”

“They both deserve to be recognised for their commitment to biosecurity and personal resilience in the face of very trying experiences.”

The 2018 Australian Biosecurity Awards were presented at a gala dinner, part of the ABARES Outlook Conference in Canberra in March 2018. 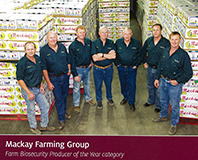 Established in the 1990s, the farm is located at the top of the river catchment and there are no other farms above it, helping to naturally exclude pests and other disease threats. Motivated by a desire to keep nematodes and other banana pest and diseases away from Bolinda Estates, they have always had sound biosecurity practices on-farm.

Bolinda Estates was well positioned to deal with the threat of Panama disease TR4 when it struck the Tully area in March 2015. But there is no guarantee that even the highest levels of biosecurity will ensure a farming business remains pest and disease free. On 12 July 2017, Bolinda Estate, Australia’s largest banana farm, was placed under quarantine following a positive test result for TR4.

Due to the biosecurity measures they had in place, one section of the property could be isolated from the rest and they were able to keep the business going with only a few hours down-time. 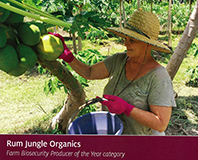 Alan Petersen and Julie-Ann Murphy are the owners of Rum Jungle Organics, outside Batchelor about an hour south of Darwin.

Their principal crop is bananas, but after the discovery of banana freckle in 2013, all banana trees on their property had to be destroyed and disposed of as part of the National Banana Freckle Eradication Program, resulting in virtually no farm income for the past four years.

After recently being allowed to re-plant a new crop of bananas, the trees are now producing fruit and they have again started selling top quality fruit at the local markets.