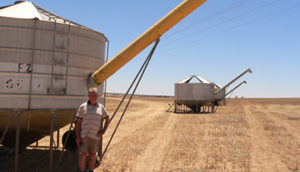 Grain farmer Ron Creagh from Nungarin, WA was a winner of the Plant Biosecurity Farmer of the Year Award.

Ron captured the award with the depth and breadth of his experience, which plays a role not only in his own business but also the broader community and the WA grains industry.

Brad Siebert, Plant Health Australia’s manager for biosecurity planning and implementation, said: “The potential sources of biosecurity risks are clear to Ron. He recognises that practicing on-farm biosecurity is fundamental to the long-term success of his business.

Ron also has a well-rounded understanding of the benefits of regional biosecurity efforts, as a result of his long-term involvement with a number of national and state-based biosecurity groups.

He provides important linkages between growers and researchers and promotes the uptake of technical biosecurity information at the farm level,” said Mr Siebert.

Biosecurity is a principle adopted by the Creagh family, their farm workers and farm visitors.

“Having a biosecurity sign at the front gate of the property has helped to instil a degree of discipline to all who come on the property. It is mandatory that all visitors come to the house or sheds and that they travel around the property in farm vehicles,” said Mr Creagh.

Surveillance is a practice Ron and his farm workers undertake in their everyday work. He believes that this has served him well and will be of future value, particularly since he is in an area where skeleton weed is a problem.

Containment of weed incursions onto the property is seen as being an expensive but necessary practice. All weed issues are noted and recorded on a daily basis.

“You need to nip these in the bud before they spread,” he said.

Surveillance is also used to manage the risks posed by exotic pests to the grains industry.

“My key concerns are those that will cause market access issues to grain exports such as Khapra beetle and Karnal bunt,” said Mr Creagh.

The threat of exotic pests drove Ron to help develop management plans for farms in the event of pest incursions, and also the implementation of Industry Funding Schemes (IFS) which are now in place in WA.

While controlling who and what come onto your farm is Ron’s key message to other producers, he added: “You also need to practice what you preach.”