Finalist cool as a cucumber in the face of virus threat

Finalist cool as a cucumber in the face of virus threat 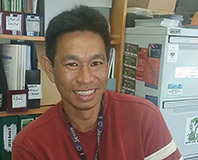 Michael Quach from Lake Bennett Hydroponic Cucumbers at Noonamah, Northern Territory, was a finalist for the Plant Biosecurity Farmer of the Year Award.

When threatened by a cucumber virus that could affect his crop, he ramped up on-farm biosecurity measures to protect his livelihood from the disease.

Cucumber green mottled mosaic virus (CGMMV) hit melon growers in the Northern Territory in 2014, resulting in swift quarantine measures being enforced on a number of properties. While Top End cucurbit growers were anxious about the virus spreading onto their properties, Michael was proactive in his approach to limiting its spread.

“He should be commended for embracing strict biosecurity measures on-farm in the face of a serious plant virus threat,” said Dr Jessica Lye, Biosecurity Officer for AUSVEG.

“On a visit I made to the Northern Territory we met at a location well away from his growing operation. During the meeting he gave me an overview of the biosecurity measures he has put in place in response to the threat,” said Jessica.

Understanding how the virus can enter and spread on a property has ensured his property remains free from the disease. Michael has appointed a biosecurity manager to educate his workforce and established a number of growing zones on his property.

The virus can be transferred in soil, so workers use footbaths before entering growing areas. Workers are also required to wash and disinfect their hands regularly, and to clean their shears when moving between zones because the virus is easily transferred from one plant to another by touching plants and through equipment like secateurs.

Michael uses a separate car off-farm, and takes care of fertiliser deliveries for himself, rather than having someone else deliver it to his property.

Transfer of the virus from one growing season to the next is minimised by replacing string and hydro bags every season (after two plantings) and never reusing packing boxes. He also burns old plant material each season, and burns weeds (which can also be infected with the virus) during the wet season.

Visitor movement on his property is carefully managed.

“Anybody who wants to enter the property needs to call Michael first and wait to be escorted around the property. Visitors and their vehicles must stop at the house, which is at the front of the property,” said Jessica.

“Workers on his property do not work on other properties. They live on-site and are required to practice biosecurity measures, such as having a dedicated pair of shoes for working on the property and another pair of shoes to wear when leaving the property.”

Michael has also worked with the Northern Territory Farmers Association to develop a farm biosecurity plan, and has contributed to the CGMMV grower working group. His initiatives benefit the community by minimising the spread of the virus and encourage other growers to do the same.