Unseen does not mean clean

Unseen does not mean clean 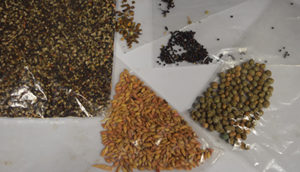 Some of the contents found in the second-hand seeder, including fertiliser, plant material, canola, lupin, wheat and wild radish seeds

When does clean, really mean clean when it comes to purchasing a second-hand machine?

If you are purchasing a piece of second-hand machinery don’t assume that it is completely clean, even if it has been inspected, recommends NSW Grains Biosecurity Officer Bill Gordon.

“Any machinery that has been used in crop production is likely to have traces of soil, plant material or seed that may not be visible, even after an initial inspection and a decent clean,” said Bill.

“Growers should always inspect equipment for themselves and thoroughly clean any second-hand machinery before they use it on their own farms.”

“As an industry we all share the responsibility to prevent, eliminate or minimise biosecurity risks, not only to meet state biosecurity obligations, but more importantly to protect our own farms and the grains industry from exotic pest incursions.”

“A great example of taking grain biosecurity seriously was demonstrated recently by an alert grower from New South Wales who had purchased a second-hand seeder from another area.”

“After delivery of the seeder the grower decided to thoroughly inspect and clean the machine before using it on the farm.”

The grower disassembled the seeder, including the distribution tubes and found a quantity of fertiliser, seed and other plant material that was not visible, or easily accessible.

“Amongst the material were many seeds, including canola, wheat, lupins and weed seeds,” he described.

“This discovery of lupin seed was timely, considering the announcement in May of the lifting of restrictions to growing lupins in the NSW lupin anthracnose biosecurity zone.”

The lifting of planting restrictions has followed a period of surveillance by NSW DPI and Local Land Services after an incursion of the disease into NSW in 2016.

No further occurrence of the disease has been recorded in NSW however it is currently present in Western Australia and South Australia.

For Bill this example highlights the need for anyone purchasing second-hand machinery to be biosecurity aware.

“This alert grower’s actions are a great example of biosecurity best practice and may have prevented an incursion of another seed borne disease into NSW,” he said.

“Apart from introducing diseases that are not present in your area, the risk of spreading resistant weeds, insect pests or even genetically modified seeds into areas where they are not permitted or desired can be prevented by inspecting machinery before using it.”

“Know where the machine has come from, understand what may be hidden within it, and make sure it is clean before it is used on your farm.”