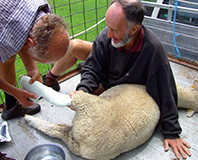 One thing is clear from the results of the 2017 Farm Biosecurity Producer Survey: you are working together more than ever before to secure your farms against all manner of biosecurity threats.

When 1200 producers across Australia were interviewed it was discovered that two-thirds of them, regardless of what they farm, share the responsibility for monitoring their crops and livestock for signs of diseases, pests and weeds with others in their operation, such as family members and staff. This has doubled from one-third since this question was asked in 2013.

There was also a significant increase in producers bringing in consultants to assist with monitoring, up from 45% in 2013 to 69% in 2017 among plant and grain growers and up from 15% to 25% among livestock producers.

As for sharing their monitoring results, 88% of producers said they would share with the Australian Government Department of Agriculture and Water Resources. The positive results continue, with 90% of plant producers and 97% of grains producers willing to share records with their agronomist, and 89% of livestock producers happy to share with their vet.

Agronomists and vets were also a favoured source of general biosecurity information, with 34% of plant and 59% of grain producers relying on their agronomist for advice and 39% of livestock producers receiving most of their information from their vet.

Lastly, when checking for unusual pests or signs of disease or on a property, 49% of plant producers and 66% of grain producers seek help from an agronomist, and 49% of livestock producers approach their vet.

This growing collaborative effort is great news – strong biosecurity practices on-farm help protect producers from existing and emerging threats. Everyone has a part to play in ensuring Australia’s freedom from diseases, pests and weeds which impact farms.

Explanations of the six essentials of on-farm biosecurity, along with further resources for producers, can be found on the Farm Biosecurity website.